Also include Clash of Clan and Hay Day 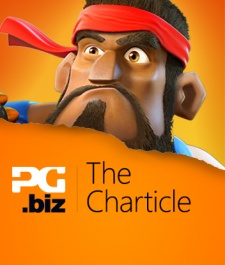 Given the fragmented state of China's Android market, western developers need to work with local publishers to distribute their games as widely as possible.

That's the reason Supercell has hooked up with Beijing publisher Kunlun Wanwei for the Android release of Boom Beach.

Kunlun Wanwei also has deals in place to distribute Supercell's other games - Clash of Clans and Hay Day  - on Android app stores.

In terms of the Chinese Apple App Store, Boom Beach has been very successful, especially for a western game.

Although it hasn't maintained a position within the top 100 downloads chart for iPhone, and has also now slipped out the top 100 on iPad, its top grossing performance is strong.

On iPhone, Boom Beach was in the top 20 top grossing for four months, while iPad - on its more natural platform - it remains solidly within the top 10.

As in the west, iOS users monetise better than Android in China, but around 70 percent of value of the Chinese mobile games market is generated via the dozens of Android app stores that have bloomed following the banning of Google Play, which like most Google products is only available in Hong Kong. Reply
Firas Kasemu
where can i do the download?