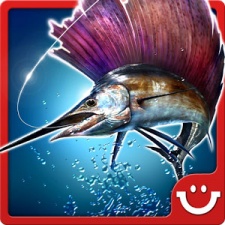 In the main, this was due to the performance of two very different games - RPG Summoner's War and fishing sim Ace Fishing - Wild Catch.

We've already taken a look at the performance of Summoner's War in a previous Charticle, so now it's time to consider Ace Fishing.

In the 12 months since its launch, the game has accumulated over 30 million downloads.

These have been well distributed around the world and across the Apple App Store and Google Play, as the following graphs demonstrate.

The one that got away

That stated, however, the US market hasn't been the most productive pool of revenue for Com2uS.

On iPhone - which performed much better than iPad - the game peaked early at #50 on the US iPhone top grossing chart, falling away quickly, although occasionally peaking within the top 250.

As is often the case, the game's performance in the UK mirrors that of the US.

On iPhone, the game launched well in the UK and during the past 12 months has even experienced peaks within the iPhone top grossing top 50, but it's not found a consistent position.

Interestingly the game's performance almost exactly the same in these two countries, where it launched more strongly than in the UK and maintained a position within the top 50 for most of 2014, even now remaining within the top 100.

The situation on the iPhone top grossing chart isn't quite so impressive. Ace Fishing does better in Germany, where it maintained a top 100 position during 2014, but is now showing an increasing amount of chart position volatility.

In France, Ace Fishing kept a higher top grossing position until October 2014, although its decline has been somewhat reversed in recent months.

Of course, as a South Korean company, Com2uS is well aware of the power of its domestic market, which is heavily dominated by Android devices.

On Google Play, Ace Fishing has performed best of all the big mobile game markets, remaining in the top 100 top grossing charts for the vast majority of the past 12 months.

Indeed, it's recently surged to its highest position ever, and is now well within the top 50.

Fishing in the South China Sea

In other Asian territories the picture is more mixed.

For example, Ace Fishing has been a total flop in Japan - both on iPhone and Android.

Instead, it's in the emerging south east Asian countries where Ace Fishing has found strong support.

All of these are Android-dominated territories, of course.

On Google Play in Hong Kong (a reflection of Chinese appeal) and Malaysia, Ace Fishing has been a massive hit, remaining in the top 20 top grossing for most of the past 12 months.