How good is best? 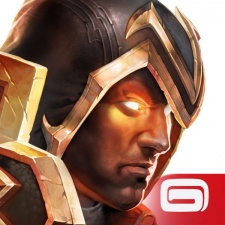 As part of its FY15 Q1 financials, French publisher Gameloft called Dungeon Hunter 5 its "highest ever revenue-generating game at launch".

Unfortunately, it didn't go any further in terms putting real numbers to that statement, so being the curious beancounters we are, we've decided to run the game through our Charticle engine to see exactly where in the world it's making money.

Unlike many games, Dungeon Hunter 5 has performed better on iPad than iPhone, at least in terms of its peak download positions.

Perhaps this is because of its filesize, which is listed at around 700 MB on the App Store, and installs at 1.3 GB, is more suited to a longform play device than the everyday and generally always-full iPhone.

For that reason, we've decided to look at its iOS performance on iPad.

In terms of some of the main English-speaking markets, our first graph demonstrates plenty of volatility.

Neither in Australia, the UK or the US has Dungeon Hunter 5 managed to sustain its performance, although it has peaked within the top 50 in Australia (#9) and the UK (#24).

Peak performance in the US was a weak #121 however.

The situation is different when it comes to France, Germany and Russia, though.

However, in recent days, it's slipped out the top 100 in all three, suggesting that Gameloft is going to have to work hard on events and update to maintain this good start.

To find Dungeon Hunter 5's best market, we have to look outside of the west to China.

The game peaked at #9 on the Chinese iPad top grossing chart and has remained in the top 50 for six weeks, although it is now slipping down.

In contrast, the game's performance in the Hong Kong market has been very volatile, at some points matching China, while dropping outside of the top 150 at others.

It's a similar story in Taiwan and Korea; the game has hit good peaks - #14 in Taiwan and #15 in South Korea but seldom experienced week-on-week consistently.

(Incidentally it didn't find any audience in Japan, which is why the country doesn't appear on any of this week's graphs.)

Of course, Android is more important in these Asian markets than iPad, but looking at the Google Play top grossing charts (which are much less spiky than iOS because of the way Google calculates chart position) doesn't provide a much better picture for Gameloft.

In neither Hong Kong (peak #55), South Korea, which is an Android-dominated market (#73) or Taiwan (#134) has Dungeon Hunter 5 found a paying audience.

Sadly, as Google Play is effectively banned in China and data for local Android market not available through App Annie, we can't track the game's performance in its best iOS market.

Heading back to western markets, we see a similar situation to that which we saw for iPad.

Russia is Dungeon Hunter 5's strongest market, with the game solidly in the top 50 top grossing, with a peak of #30.

France is next with a peak of #50 and Germany in relative third, peaking at #67.

Yet we should point out that Germany is the biggest of the three markets in terms of Google Play revenue (ranked #4 globally), followed by France (ranked #7) and then Russia (ranked #11) so for Gameloft, Dungeon Hunter 5 is performing best in the least lucrative of these three countries.

Dungeon Hunter 5 has been a flop in the key US market, and hasn't maintained a top 100 Google Play ranking in the UK or Australian charts.

Of course, none of this changes the statement that Dungeon Hunter 5 is Gameloft's "highest ever revenue-generating game at launch".

But its impressive performance in China-aside, it does go someway to underlining the issue that Gameloft can't yet point to a strong F2P global hit game in the way that the likes of King, Supercell and Glu Mobile can.