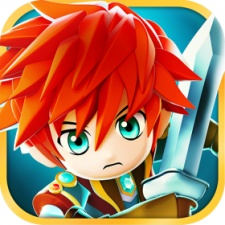 This time, we're taking a look at COLOPL Rune Story, an action JRPG and COLOPL's first foray into the western market.

Putting the J in JRPG

From the minute you load up COLOPL Rune Story, its Japanese heritage is obvious.

With cutesy chibi character design, anime-grade blue skies and giant monsters that bleed numbers, it's evocative of the PlayStation and PS2 eras in which Japanese game design led the way.

And indeed, it's a welcome antidote to our modern era in which - at least in the west - such vibrant games come along far more rarely.

Played in portrait orientation, Rune Story gives you total control over each quest. It has you dragging and swiping to move and roll respectively, while tapping to launch attacks in a system that's both streamlined and robust enough to feel involving.

A little like the system in Dawn of Steel, you can also tactically switch control between various units on the fly, perhaps making use of a character with projectile attacks for a flying enemy or getting in quick with a swordsman against a lumbering beast.

The actual combat in free-to-play games can often feel like an unwanted distraction to the real thrust that is the ongoing meta-game - to the extent that player input is being minimised, with auto-playing missions and the like - but here it remains entertaining for the long haul.

Rune Story has everything you'd expect from any JRPG worth its salt.

And it has everything you'd expect from any JRPG worth its salt, too: reams of stats for each character, ample opportunities for levelling up and upgrading weapons, characters, and buildings, alongside a story featuring a talking cat.

What more could you possibly want?

The first, Gold, is accrued through mines stationed at your base - a system familiar to anyone who's played a mobile strategy game - and can be used to fund buildings.

The second is Souls, which functions as a kind of XP system. Accrued on the battlefield for every felled enemy, Souls can then be ploughed back into improving your character's stats on the Soul Board, which in turn contributes to their overall level.

Finally, Jewels are obtained both through IAPs and an extremely generous series of achievement and quest rewards that makes the term “hard currency” seem slightly harsh.

Jewels go towards summoning new, random characters (although they're periodically given away for free as you progress), as well as forging new weapons.

That's the great thing about Rune Story; you're always given multiple options that don't involve spending.

Costing 25 (characters) and 15 Jewels (weapons) respectively, and with the quality of your summon obviously being a mixed bag, this is Rune Story's gacha-esque system and the main thrust of its monetisation with no ads or energy system to speak of.

It is, however, entirely optional. Your first couple of summons comes free, which - along with the crimson-haired, player-named lead character - completes your requisite band of three.

With upgrades along the way, you could quite feasibly make it through without summoning any more characters.

However, if the free summons aren't enough, then perhaps the 50 Jewels (almost $10 in real money) you start out with will be enough to sate your appetite.

That's the great thing about Rune Story; you're always given multiple options that don't involve spending.

However, COLOPL is relying on dedicated players to put their hands in pockets and support the game.

The oddly-priced Jewel bundles don't seem to use Apple's standard pricing tiers, and therefore aren't easily translatable to other territories, but in the UK they range from 5 for £0.77 to 780 for £77.57.

Apart from the slightly odd 5-Jewel pack, which seemingly exists only to pay the 2-Jewel revival cost in co-op missions, these all offer good value for the price.

However, by far the most interesting option - and one I'd never seen before - was a £3.88 'Monthly Jewel' bundle which grants 27 Jewels immediately followed by an additional 10 every 24 hours for the next 30 days.

By far the most interesting option was a £3.88 Monthly Jewel bundle.

I've yet to see whether this is actually renewable each month, resulting in something broadly akin to a subscription service, or if this is a one-time offer to boost retention in the early game.

Regardless, it was simply too good to pass up and it strikes me as exactly the kind of player-friendly system that this series exists to shine a light on.

With the steady flow of Jewels that occurs through playing the game normally, I'd already accrued a healthy stash and at no point was I even close to running low.

However, having fun and feeling as though I'd been treated well, I actually wanted to reward the team by spending money.

Some developers rely on establishing a reciprocal relationship that ultimately never pays off for them financially, as they attempt to strike the tricky balance between too much and not enough pressure to spend.

If Rune Story's guilty of either, it's certainly the latter. However, the experience it was offering was enough to pry open my wallet, and I sincerely hope it inspires others to do the same.

Not only is it doing something different, but it's accomplished to boot. It deserves to be successful.

But then, when has that ever meant anything?