Chart of the Week: The hard value of cloud gaming services predicted

Fluffy around the edges?

But let's try to put some numbers to the increasingly airy-fairy concept.

As argued in a keynote at Mobile Games Forum a couple of week ago - by Microsoft's CTO for cloud services, Rob Fraser - it seems the impact of the cloud can be over-exaggerated, especially by us journalists.

If we look at this graph of the size of the entire games industry from 1995 to predicted 2017 - as created by market analyst Nick Parker - the green slice due directly from cloud services such as streaming games is not large.

It's not until 2014 that cloud gaming is generating sizeable revenue. 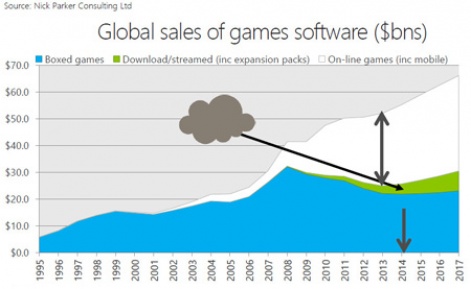 Of course, both boxed games and online/mobile will be impacted by cloud services, in terms of synced game states and downloaded content, but that's not the cutting-edge of the cloud.

Still, as OnLive has demonstrated, going 100 percent cloud is much harder than its fluffy exterior suggests.