Chart of the Week: Chinese mobile gamers are playing for longer and more often

It's discovered that the population is playing games for longer and more often.

The amount of time spent in apps daily, and the frequency with which users are opening apps, have increased across almost all categories, in fact.

Video apps, for instance, were opened 24 percent more often in 2012 against the previous year, and the average amount of time spent in these applications is up 259 percent.

The rise in time spent in-app hasn't been quite so sharp in the games category, but it's certainly increasing. In 2012, Chinese mobile gamers spent an average of almost 50 percent more time in games per day than in previous years. 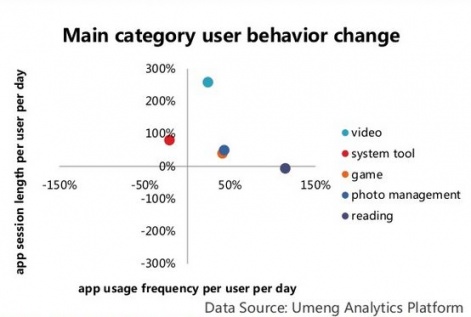 Western developers who find themselves tempted by the size of the Chinese mobile market shouldn't be too hasty, though.

You can find out more about Umeng's assessment of the Chinese mobile market in its China Mobile Internet 2012 Review insight report.