Chart of the Week: Is LINE or KakaoTalk growing faster?

May 3rd, 2013 - 12:13pm
By Jon Jordan, Contributing Editor
When it comes to messaging services and social networks, the end goal is massive scale.

After all, you only need one social network, right?

Well, that's the theory, but it's a big ol' fragmented world out there, so there are regional variations, especially when it comes to mobile messaging.

That's why we have options such as iMessenger, BBM, WhatsApp, not to mention the big Asian services like LINE, KakaoTalk and WeChat.

More hockey stick than you

When it comes to mobile gaming, however, the big plays are LINE and KakaoTalk.

The Korean and Japanese top grossing charts are becoming dominated by simple casual games that have been released with support for these viral services.

So which is growing faster? The graph below makes this clear. 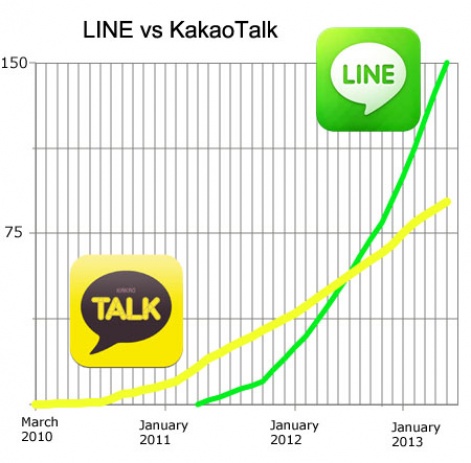 With 150 million users to KakaoTalk's 89 million, LINE is bigger and growing much faster.

Still, as the rivals look to break into new markets such as the US, Spain and Indonesia, there's plenty of install base to play for.