The stark numbers behind the business

May 28th, 2013 - 10:14am
By Jon Jordan, Contributing Editor
Playnomics is one of those companies that's tricky to pin down.

Of course, it crunches big data, and it throws out actionable data that helps player acquisition, segmentation, retention, and ultimately life time value.

Who doesn't these days?

What's somewhat different, however, is it looks at this value proposition through the lens of user behaviour.

Again, this isn't new. We've had player types since the Bartle Test of Gamer Psychology in 1996, but things are obviously a lot more sophisticated now.

Taking the data from "50 million social, casual and mobile players in the Playnomics game network" during Q1 2013, it looks to shed a light on the variation of behaviours in terms of game types, player types and geography.

One caveat to mention before we dive into it, however, is the company's split between arcade and non-arcade games.

Adding a seemingly self-selection bias into the data, Playnomics defines arcade games as those "intended to provide short-term and immediate entertainment."

I can see what the company is trying to do, but it feels artificial nevertheless.

That's more than a whale

Luckily, though, this division of game types doesn't matter in terms of our Chart of the Week.

For the scary conclusion of the survey that of 1.7 million players (of non-arcade games) tracked during Q1 2013, Playnomics reckoned that only 13,454 spent any money in-game - that's 0.77 percent. 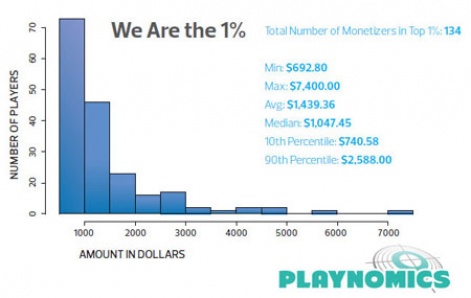 Reply
jon jordan
More likely to be a Gulf State prince or a professional sports player, both of which have been know to spend $10,000s in single games.
Posted 7 years, 10 months ago

Reply
Simon Edis Game Designer at Ezone.com
That $7,400 must have been a kid that got their parent's password!
Posted 7 years, 10 months ago