Chart of the Week: Advertising makes up just 5% of mobile and portable gaming revenue

Reacting to the King

June 17th, 2013 - 03:36pm
By Keith Andrew
The week after casual gaming giant King announced it is pulling advertising from its games  relying, instead, solely on in-app purchase revenue  it's interesting to assess just how much money ads still bring in across the industry.

App Annie and IDC claim to have the answer.

In the latest paper from the two firms  the Portable Gaming Report  it's claimed that 95 percent of mobile and portable game software revenue now comes from either users paying up front for games, or paying out via microtransactions.

Advertising, the paper claims, accounts for just 5 percent of revenue across the industry now.

Could King's move be the first of many, then? In-app advertising is certainly no longer the be all and end all for developers looking to go free with their releases, but its role as a tool for cross-promotion between different games from different studios can't be denied, either. 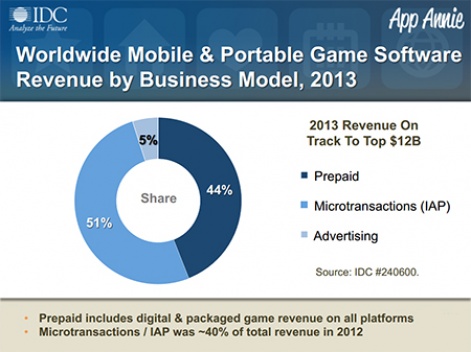