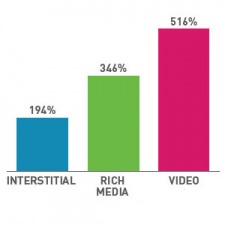 Developers using the Nexage Marketplace are currently way ahead of the curve, at least that's how Nexage views the situation.

It reckons its developers have seen revenue grow by 165 percent in 2014 alone - a figure that's double the current expected market growth for mobile advertising.

According the market research carried out by Nexage, that growth was driven by a combination of price and volume gains.

The firm found that eCPMs have grown by 55 percent in 2014, a rise that continues the long-standing trend of CPMs increasing on the Nexage marketplace.

Nexage explained that those price gains are driven by some key factors, one of which is the simple fact that brand buyers are now more interested in app inventory than ever before.

As well as that, app marketers are now willing to pay more for high-value users, which has in turn increased the competition for app inventory.

This is also being enhanced by better targeting. Nexage says developers who pass on device ID can gain a 67 percent eCPM premium, while passing on location data adds a 131 percent premium.

Finally, the marketing outfit revealed the sheer scale of its network has also grown: up 66 percent in 2014.

The banner is dead

More generally, the key trend throughout the industry is the power of new ad formats - notably video.

Nexage noted that request for video ads were up 516 percent, which lead to an 404 percent increase in video ads delivered. The difference comes as developers choose not to show all the requested ads, partly because of the increase in CPMs.

Nexage says video ads can produce a premium of 7-12 times over banners.

So, what does this mean for the mobile marketing space?

Well, according to Nexage, it means that we're entering a new era, that's set to be defined by a "new normal".

Advertisers must adapt and harness the power of mobile, or face extinction.

"Advertisers and agencies are adapting to a mobile-centric, app-centric world, where mobile will soon exceed desktop in ad spend and 80 percent of mobile traffic is app traffic," read a Nexage statement.

"In other words, if advertisers are going to reach the mobile consumer, they will need to reach them through apps. This pragmatic view is coupled with greater familiarity and comfort in the performance of brand-safe app traffic sold on the Nexage Marketplace.

"Welcome to the new normal."