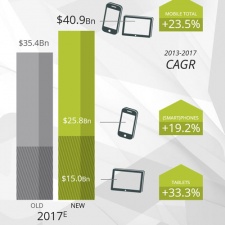 Of this, Newzoo reckons $7.6 billion will be from tablets and the remaining $17.3 billion from smartphones.

That strong year-on-year growth means that mobile games are on track to replace the console market as the largest game segment in terms of revenue, by 2015.

Newzoo says market growth is broad with both western and emerging markets witnessing healthy growth during 2014.

It predicts growth of 47 percent in western Europe and 51 percent in North American.

The fastest growth, however, can be found in the east, with China (86 percent annual growth), Japan, and southeast Asian markets enjoying an increase in iOS and especially Android revenues.

The research also shows that the mobile platform is being driven by organic growth, which lifts the overall market, and cannibalistic growth, which consumes other market segments.

Newzoo estimates that Apple's App Store will account for half of 2014 revenue, with Google Play accouting for the majority of the remainder.

Newzoo analyst Vincent van Deelen believes that the new forecast undermines those who still claim that the mobile market is becoming saturated, particularly in the west.

“With the public release of these new forecasts, Newzoo is deliberately countering the sentiment aired in recent months that the mobile gaming market is becoming saturated in mature Western markets, especially the US. This is simply not the case," explained van Deelen.

"We are also emphasising that the recent results of individual high profile companies such as Rovio, King, DeNA and GREE are not necessarily indicative of the state of the mobile market as a whole.

"It is not in our interest to inflate market figures, but the hard facts have forced us to adjust our estimates upward. We have maintained our year-on-year growth rates toward 2017, ultimately leading to a $40Bn+ market in 2017."