AppsFlyer crowns AppLovin as best iOS ad network based on 1-, 7- and 30-day retention 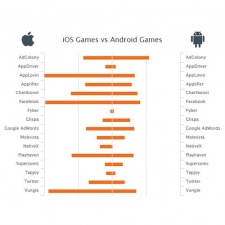 In a move certain to generate controversy among some of the listed companies, mobile ad measure platform AppsFlyer has ranked the performance of the top mobile ad networks.

It tracked 50 million installs generated by paid advertising during February and March 2015.

On that basis, it's also generated some headline findings;

However, it's the direct ranking of 25 ad networks in terms of their 1-, 7- and 30-day retention on iOS and Android that's bound to cause some discussion.

On that basis, AppsFlyer reckons that AppLovin is the best ad network, although Facebook ranks #1 in terms of the quality and quantity of installs it can deliver on iOS and Android.

You can check out interactive graphs of AppsFlyer's findings using the following links.

Or check out the full report here.