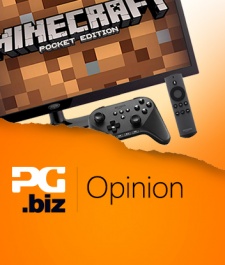 Update: For a company that doesn't care about games, Amazon sure talks a lot about games.

The refresh of its streaming Fire TV hardware has been reinforced by a Gaming Edition bundle, while its new Fire HD tablets are the company's first hardware to ship with the free-to-consumers Amazon Underground platform pre-installed. It comes as part of the new Fire OS 5.

Yet 17 months ago, editor-at-large Jon Jordan was explaining his skepticism that Amazon could ever care about games.

You used to know where you were with games.

Just like when we wanted to buy a book, we went to the bookshop.

Such neat demarcation is now long gone; fragmented within a consumer world where devices, content, commerce and relationships interact in a confusing world in which every company tries to take a slice of everything.

Although, in the case of Amazon's just US-launched $99 Fire TV box, it's less a Trojan Horse, more like its Trojan My Little Pony - games could hardly have been a lower key element.

Whereas Apple's Steve Jobs saved his most exciting announcements until an ending "One more thing..", Amazon's announcement on Fire TV's abilities as a game console were only listed after 2,169 words in the press release under the headline "Bonus - Great Games at Low Prices".

Other less-than-complimentary messaging included the phrase "Great for games too".

Of course, I could be e-reading too much into it.

In the past, I've sat through 2 hour Apple press conferences that contained less than 2 minutes of talk about games. Yet despite the company's apathy for its largest app category, iOS remains the biggest single market for game developers.

And there are signs that Amazon is investing heavily in games; notably in terms of its internal Amazon Game Studios organisation, which was recently bolstered by industry veterans such as Portal designer Kim Swift and all-round design guru Clint 'Ludo Narrative Dissonance' Hocking.

It's even gone one better than Apple and released its own gamepad.

For once spotty adolescents, terms like "Bonus" and "..too" speak louder, however. Fire TV isn't about gaming and Amazon doesn't care about games either.

You are what you sell

My reasoning is simple. Amazon isn't a content company.

Indeed, as has been demonstrated in recent books and articles, it quickly shelved its internal expertise in book publishing, author A&R or critical education, replacing it with recommendation algorithms and low, low prices.

Individual authors might have done better from Amazon's rise and its subsequent e-readers, but the book industry certainly hasn't.

It's a similar situation in terms of Amazon's broader retailing. Personally, I'm a fan, using it regularly. I'm currently awaiting a delivery of a respirator mask for when I travel back to China, and some athletes foot cream for - well you can probably guess. (In fact, there's the door bell...)

But Amazon doesn't care about the things it sells. It cares about selling as many of them as possible.

The Great Wall of Amazon

In that context, Fire TV's role - like iTunes and iCloud for Apple - is that it further locks people into the Amazon ecosystem.

With Apple TV, Roku and Chromecast starting to gain market traction, Fire TV is a defensive move for Amazon. It was the same with Kindle Fire. Decent hardware at a great price, it hasn't impacted the broader tablet market but it has locked in Amazon's existing best customers, who spend more with Amazon because of it.

So while Amazon Game Studios now employs some talented people, there's little reason for it to exist.

Although lacking compared to iOS and Google Play, the forked Amazon Appstore for Android has enough thirdparty content for the audience that's going to be "playing games too" on the Fire TV.

And the likes of EA, Gameloft, Disney, Ubisoft, 2K and Sega will be bringing over some of their games to the devices, with thousands of additional titles promised.

Build it. Will they come?

Indeed, depressingly for those talented people working at Amazon Game Studios, I'd suggest they're making games for a small audience of people who don't play games and who certainly don't care about their exclusive content.

Even if you assume Amazon Game Studios releases make it onto Kindle Fire tablets - launch game Sev Zero (see below)is exclusive to Fire TV and requires the $40 controller - that's still a tiny fraction of the billion plus iOS and Android install base.

Limiting the audience further, it seems that all the games for Fire TV, and hence the games from Amazon Game Studios, will be paid titles.

"The average price of paid games on Fire TV is $1.85," says the Amazon press release, as if the free-to-play explosion had never happened.

The sneak-peak of the titles in development also suggests a fairly generic portfolio of me-too games (or should that be "me-too ... games too".

All-in-all, then, the way Amazon has sold Fire TV as a gaming platform makes the folks at unconsole rival Ouya seem like they know what they're doing. Because, for all their faults, they actually care about games.

Significantly, though, this isn't to argue that Amazon isn't becoming an important player in the mobile game ecosystem. As I've previously written, step-by-step it's slowly building itself into a powerful vertical - developer, publisher, distributor, OEM and service provider.

It's clearly an important company for mobile game publishers to be working with, but compared to Apple and Google, it's not yet a vital company, and especially not one for developers.

Fundamentally, Amazon doesn't care about content. Neither does Apple, but at least Apple has sufficient scale and audience for that not to matter.

So, the choice for Amazon is to either prove it has scale or demonstrate it cares about games. I know which I consider the more likely.

Amazon: People shouldn't have to pay $500 just to play games in the living room