Computers are gay: Scott Foe on why the industry owes a debt to homosexuals 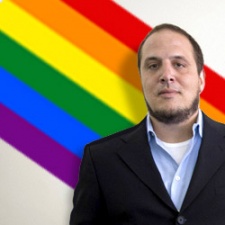 In response to our recent editorial on the lack of representation of gay people in games, chief product officer at triple-A mobile developer Unspoken Tales and long time friend of the site Scott Foe offered to give his take on the issue.

And here it is.

Every time I opened an issue-report, my heart stopped. All of our publishing quality assurance was done half-the-planet away from the development team, and, in a company whose market capitalisation was larger than the annual revenues of the entire games industry, the test department is a humourless dry-fuck.

I knew that, any day now, I would be having a very awkward conversation with the Vice President of Games.

It was a game that had inspired Edge to run an article, titled "Great Scott," that featured my face on every page. It was a game that would become the first free-to-play game nominated for an interactive achievement award.

It was a game that would move The Escapist to declare that, "Foe is the Quentin Tarantino of video games."

It was Reset Generation, named for the children who grew up with computers and video games, the world's first game about games - a summary game that would feature everything that was great about the first thirty years of gaming history.

Reset Generation would also pay homage to great game dynamics as well: Block dropping, bomb blowing, princess rescuing action. One of our guiding design philosophies was that, "Every pixel would be an Easter egg, stylised and significant."

We had our Cyborg, the rough and tumble tribute to BJ Blazkowicz, Duke Nukem, Master Chief, and all of those other great, tough-as-titanium-rail-gun-nails first-person shooter characters. With a tip of the hat to Metroid's Samus Aran, at the end of Cyborg's story arc, she removes her hammerhead helmet and reveals her femininity. (A joke punctuated by the fact that her voice is that of a sixty year-old man whose doctor had consigned him to a very strict whiskey and cigarette diet.)

We had our Sci-Fi Knight, the laser sword-wielding commander of the mystical energies of "The Fun." And we drew some critical heat from the fact that the Sci-Fi Knight was monastic to the point of being sexually frustrated. ("Sexual Frustration" is a narrative decision which I to-this-day defend: Interest is bred from conflict, and what better conflict to breed interest than the conflict-of-self that comes with a solemn promise not to breed?)

At the close of Reset Generation's story, upon completion of Battle 9-2, the Cyborg and the Sci-Fi Knight, two women, were married. If this ending seems oddly reminiscent of Monty Oum's brilliantly choreographed (and terribly perverse) "Haloid," then I can only say that our story was in-the-can in 2005, well before Haloid was released.

(All of our test was done in Canada and Europe, and, whatever reservations you might have about those places in the world, both the syrup-lovers and the Euro-spenders are far more progressive than we Yankees.)

Why? Why would we risk the game that we had worked on for years of our lives to see two women joined at the altar? Well, videogames would not be possible without computers, and computers are gay. If you're paying tribute to thirty years of amazing videogame artistry, however modest a nod is required.

Alan Turing was a hero of World War II, helping Britain's cryptographers break Germany's Enigma Code, helping the Allies turn the tide in the battle for the Atlantic.

Of the 100 most-influential people of the 20th century, Alan Turing was number-one.

Alan Turing conceived of the "Turing Machine," the academic equivalent of parchment and ink when it comes to algorithmic analysis. Time Magazine, in an article detailing the 100 most-influential people of the 20th century, opined, "The fact remains that everyone who taps at a keyboard, opening a spreadsheet or a word-processing program, is working on an incarnation of a Turing machine."

I'm going to go ahead and add addendum to Time Magazine: "a 360 controller, a Wii-mote, or an iPhone." I'm going to say that of those 100 most-influential people of the 20th century, Turing was number-one.

I'm also going to go on-record as saying, "When weighing all humans who have ever drawn breath, that cave person who discovered fire didn't amount to shit when sidled onto the scales opposite Alan Turing."

Alan Turing was homosexual, and, like most men straight-or-gay, Turing chose the wrong pillow partner.

In 1952, Arnold Murray, Turing's young lover, facilitated a break-in and robbery of Turing's house. During the police inquiry that followed, Turing's sexual relationship with Murray was documented: In those days, homosexuality was a prosecutable crime. The British stripped Turing of his government status; he faced the choice of chemical castration or imprisonment. Out-of-the-box thinker that Turing was, he chose door number-three and took his own life.

So, we had a war hero and a progenitor of artificial intelligence theory - that's right, robots are also gay, especially C3P0 - the father of computer science took his own his own life at the age of forty-one, and for what? Because he loved? By what marvelous discoveries would humanity now be enriched had we just allowed this Hyperion mind to dedicate a thought to beefcake once every six seconds?

As my mother would say, "I'm so mad that I could spit nails."

I'm so mad that I could spit nails when I think about the national question of gay marriage in the United States. There is a separation of church and state: Why not do just as so many have suggested before and remove the word "marriage" from the law, granting all couples, regardless of sex, a "civil union?"

Your fundamentalist blogs are published under the auspices of a Sodomite.

No, screw that: Forget equal rights. Computers are gay: The gays should have above-equal rights. We should hold "Ticker-Gay Parades," something more akin to "Gay Worship," than "Gay Pride." If the gays want it so, they should be the only ones allowed to use the word, "Marriage."

Computers are gay: This country's military systems provide for the common defense, courtesy of a dude who loved dudes.

Computers are gay: This country's economic systems promote the general welfare, all thanks to the other team's batter.

Computers are gay: Your fundamentalist blogs are published under the auspices of a Sodomite. I have to laugh about the idea that "fag" is the epithet of choice for Xbox Livers: These kids need to thank fags for frags.

It's not about ethics, it's about hate: The games industry closes the door on GamerGate

Reply
Homo Sapiens
Besides... what matter it has if those people are hetero, homo, trans ? Does it mean that if someone is homosexual then all world have to glorify this ? So if this is nothing unusual then why everybody have to spoke about that ? I suppose I'm too stupid to understand that ;)
Posted 8 years, 2 months ago

Reply
Keith Andrew
It's not a case of glorification - it's a case of representation. All forms of art should represent their audience and, as things stand, that's simply not happening.
Posted 8 years, 2 months ago

Reply
Keith Andrew
There's a very sad statue of Turing on a bench just outside Manchester's gay village. Is routinely dressed up and decorated by local residents for special occasions. Still incredibly depressing, though. Poor chap.
Posted 8 years, 2 months ago