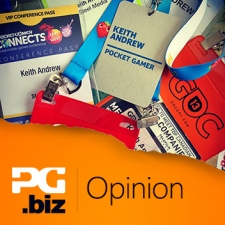 You can always tell just how often I've been away from my PC by the number of emails left unread in my inbox. At the end of last week, that number had slipped past 1,700.

1,700. And I'm not even that popular. Imagine how large that number would be if people actually wanted to contact me.

The sense of shame was so pressing within me that I was forced to remedy the situation over the weekend. By that I mean, simply mark all 1,700 plus as "read" en masse. That's a perfectly legitimate tactic, right?

Believe it or not, said bulk of unread emails has very little to do with how bad I am at my job – such an inadequacy leads to a whole host of other problems I'll save for another day – but, rather, is as a result of constantly being in transit. Covering events. Visiting conferences. Going to one too many parties.

World of their own

While you're locked off in a conference centre, pretty much anything could happen in the outside world and you'd be none the wiser – the press releases and the news tips pile up, most of which are entirely out of date by the time you head home and dare to open up your email account.

Conferences are ecosystems in their own right. They generate their own stories.

Case in point: Last week I was asked to talk to the media about Nintendo's Tomodachi Life debacle. I had to decline. Aside from the fact that I was sat in a talk at the time, I'd been so engrossed in the conference in question over the previous days that I had no idea what Nintendo had done with Tomodachi Life, or even what Tomodachi Life was.

When said conferences come to a close, however, your average games journalist spends most of his or her time fighting fires. While most are desperate to attend conferences to meet as many folk as possible – if only to steal towels from hotel rooms – most are also wary of the fact that, in the days that follow, they're going to be chasing scores of different tails.

My problems aren't your concern, of course. PocketGamer.biz hasn't become my own personal blog just yet. You're not required to offer me any sympathy – unless you catch me after a few too many beers at one of said conference parties moaning about the size of my inbox, of course.

Rather, the important thing developers should take away from this – or, indeed, anyone working in the industry – is that these events are where things happen.

The luminaries set to appear on stage may be what causes you to part with your cash and pick up a ticket, but you'd be surprised how often even conferences devoid of any major names can deliver for those who took a punt and picked up a ticket.

I know developers who have ended up working on projects – some even long term – because they ran into each other at a conference. Others that have simply connected with other people in a similar position to them, or who have overcome the same problems. There's safety in numbers.

Hell, without bringing on the violins, conferences are just a great place to make new friends. I've even made some – and a portion of them don't just like me because I'm able to sneak them a few free drinks at Pocket Gamer parties.

But for all the masses that descend on various cities around the globe throughout the year, there's a larger number that, for whatever reason, are yet to take a trip to a conference or event of any kind.

The bizarre thing is, it's not as if we're short on options.

In the last couple of weeks, I've taken trips to Newcastle and Birmingham for GameHorizon and Launch: Meet the Press respectfully. Next month, I'll be flying to Helsinki for Pocket Gamer's own conference – Pocket Gamer Connects – after a splash in London earlier in the year, before heading down to Brighton in July for Develop.

August will be dominated by the dual behemoth that is GDC Europe and Gamescom – taking up root in the German city of Cologne – all just days before Unity developers from across the globe descend on Seattle for Unite 2014.

All this is happening just over the course of the next few months, and there are a clutch of events I've not even mentioned.

A question of cash

There are, of course, issues I've not yet raised here. The budgets of most indie developers are finite and, even if there is money to splash out on a conference or two, it really is a case of picking just one or two events and making the best of them.

The era of indies operating alone needs to end. Haul your arse away from your PC every now and again and go and connect with your brothers and sisters.

Aside from the fact that there's value in simply stalking a conference without actually picking up a ticket – GDC probably the best example of this – it's not just the big events that hold value.

In the UK, trade associations UKIE and TIGA regularly host one day (or even afternoon) events on the issues impacting the industry, or workshops to help developers get to grips with the business. If you're a member, go along. If you're not, head down anyway and see if anyone wants to go for a drink afterwards.

Think you're the only developer in your town? I can almost guarantee you're not. There's an increasing number of local events popping up across the UK, for instance – in the North West alone, we have community-focused get togethers like Update and Game Dev North bringing indies together.

Even smaller than that, last week I went for a few drinks in Manchester with a healthy handful of people working in the games industry from across the city. I met people I likely wouldn't have met otherwise. I've also helped set up a group on Facebook designed to bring gay gamers in the city together for regular drinks and events. The goal? Connecting people.

One of the biggest issues I've faced in the four or so years I've spent working on PocketGamer.biz is a tendency for developers to retreat into their shells – to hide away and work in solitude. For the good of those individual creatives and, indeed, the games industry as a whole, that needs to change.

The era of indies operating alone needs to end. Haul your arse away from your PC every now and again and go and connect with your brothers and sisters – it's worth it. And, if it isn't, I'll get you a free drink at the next Pocket Gamer party if you promise to be my friend.

Indie Michal Pawlowski on finding a fresh, happy mind to come up with OXXO