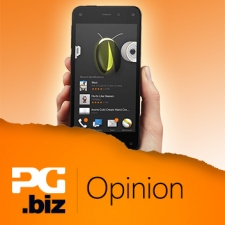 It's been an interesting week for Amazon.

The headline announcement of its Fire phone has received a mixed reaction: partly because the head-tracking 3D graphics is weird; partly because of the overt explanation that it's designed to get more Amazon Prime users to spend more money through Amazon; and partly for issues such as it only being available through AT&T and the lack of international rollout plans.

In terms of gaming, at least Amazon has been working with developers to get them to support the Dynamic Perspective.

Yet given the failure of 3D effects for PC and console games, not to mention the Nintendo 3DS, it's hard to see this being a defining feature to drive gamers to pick up a Fire phone, let alone driving downloads of supporting games on the Amazon Appstore.

No, as with all things Amazon, the point of Dynamic Perspective - as well as its Firefly catalog service and indeed the Fire phone itself - is an insular reinforcement of the Amazon retail system.

Just like the Kindle Fire tablet and Fire TV streaming service before it, Fire will build up some scale of install base, but for most game developers, it won't be large or lucrative enough compared to the potential riches on offer from iOS and Android.

That's not to say that Amazon hasn't made remarkable strides to turn its ecosystem into a good place in which to operate.

For example, the company is currently offering developers $6 per thousand interstitial ads (up to a maximum of 1 million impressions per app per month) displayed across any Amazon supported device in August and September for each new app that integrates the Amazon Mobile Ads API and support Fire phones.

It will also give developers 500,000 Amazon Coins ($5,000 value) for each of qualifying app (up to three apps) that meet the additional program requirements for Fire phone. Developers can give these Coins away to consumers.

And it's these sort of integrated campaigns that have resulted in the Amazon Appstore hosting over 240,000 apps and games - up almost a three-fold in the past 12 months.

The number of developers for Amazon devices has almost doubled too during the same period.

The reason for such developers - at least developers of a certain type of app or game - to release for Amazon devices is that all Amazon devices are designed to be frictionless when it comes to spending using your Amazon account.

So, although the total number of users is tiny compared to iOS and Android - of course, Amazon won't comment on its install base but Kindle Fire is thought to be in the 10 million range - the average revenue per user is equal or better than other platforms.

At least, Amazon quotes 74 percent of developers on Kindle Fire agreeing with this statement.

In that context, then, just like the Kindle Fire before it, the Fire phone won't have a significant impact on the wider mobile ecosystem.

It's just another Amazon play to improve Amazon's standing in the retail world. But if Amazon users are part of your core market, it's time to follow the trail of free Coins.