GamerGate is one gate that needs to be kept open

Engagement is the only way to win this debate 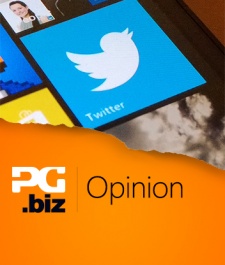 The problem with hashtags is they're open to everyone.

That is, of course, their strength as well – tweets and status updates can be tied together under one banner, with people given a sense of ownership over the topic.

Whole themes can gain massive momentum and reach thanks to the will of the people, rather than through sheer corporate power.

The flip side of the coin is that topics can be entirely hijacked and the message diluted by scores of disparate voices.

For me, that's exactly what GamerGate represents – a collection of, perhaps, genuine concerns drowned out by an internet eager to drop all its ills into one pot.

For self proclaimed 'gamers', GamerGate provides a common enemy. A handy target.

Evidence of just how diluted the original message behind GamerGate has become – which, if you boil it down, seemed to be a concern that editors were crushing freedom of speech in games journalism in order to push an 'ethical' agenda – comes from if you actually take to Twitter and ask people what the hashtag actually means.

The more you talk, the more noise gets thrown in your direction.

Give it a few minutes and you'll likely be told it's everything from anger at journalists daring to tackle homophobia or sexism in the industry to a worldwide conspiracy where figures from pretty much every media outlet you can think of have somehow come together to push propaganda designed to crush the will of the 'gamer'.

It's a situation that means that, for the people looking to take on GamerGate, there's no one issue they can take on and debate.

The more you talk, the more noise gets thrown in your direction.

The good, the bad and the ugly

Over the weekend, however, that appeared to change. Some of those angry at the games media decided to offer up their own solution – GoodGamers.us.

Billed as being “all of the gaming news, none of the bullshit”, it would be entirely disingenuous to suggest that the site is in any way representative of those pushing the GamerGate hashtag, but it was cited by many as an example of the way games journalism should be handled moving ahead.

As stated by editor-in-chief Stephanie Anne, the site is an “attempt at a change”, stated she wants to create something “free of advertisements and corruptions, where the political arguments were clearly labeled [sic] and not all over the front page.”

“A site where you could come for honest game reviews, and honest discussion,” continues Anne. “A site that was not owned by some multi-million dollar conglomerate, but by the gaming community itself. I want you, the reader, to submit article ideas, and tell us what you want to read about. This is your site, and we are but your humble servants.”

It would be utterly daft to dismiss GoodGamers.us.

The fact that a proportion of 'gamers' feel disconnected enough with existing games media to set up a dedicated alternative should be a genuine worry for editors of consumer sites.

At the same time, amateur websites pop up every week – by its own admission, GoodGamers.us is run by volunteers and is not an attempt to launch a media enterprise. Indeed, according to Anne, the very fact writers are paid is part of the reason they can't be trusted.

“Our writers will not accept payment for articles, and any conflicts of interests will be disclosed up front,” adds Anne.

What do you do when your mum, your grandad and your postman all play more games than you?

There's no reason to believe that GoodGamers.us has any real momentum or that the GamerGate hashtag will even be popping up across social media in a week or two, but the regularity of these online 'scandals' – where the practices of the games press is brought into sharp focus – appears to be on the up.

The problem is, many websites and magazines alike – many of which are staffed by writers who also started out putting out content without pay – don't know how to deal with the explosion in gaming in recent years.

It's a difficulty that actually mirrors the concerns of those behind the GamerGate hashtag: what do you do when the thing you loved suddenly becomes the most popular form of entertainment on the planet?

What do you do when your mum, your grandad and your postman all technically play more games than you do? Where do you draw the line between casual and hardcore? And should you in the first place?

Talking over this issue at the weekend with a developer friend of mine, the conclusion we drew was that there's no great editorial conspiracy to push out standard coverage of games in favour of 'ethical editorials'.

Instead, we have two forces in action: firstly, the rise of free games and playable betas meaning standard games coverage – reviews and news – is no longer as potent a page view generator as it was even five years ago.

Secondly, the games industry is maturing. The widening of the audience and the sheer amount of money games pull in means the issues the media covering it has had to mature too.

If games is really to be considered as important culturally as music, film and TV, then the press tied to it has to be held to the similar standards. Can you imagine film buffs complaining if a prominent critic looked into gender bias in Hollywood movies, or if a music critic looked into the themes covered in a band's latest album?

A multi-billion dollar industry like games has to be held to the same standards as any other – it doesn't get a bye just because a portion of its audience are uncomfortable with the wider industry's popularity.

Sure, it's entirely possible to have a 'no-nonsense' website that deals solely in matter-of-fact reviews and news, with broader features, interviews and editorials left out. Such a site would be entirely niche, however – the reason editors are so willing to push discursive pieces is because that is, broadly speaking, what audiences want.

Simply churning out reviews and re-farming news stories from the sites lucky enough to pick up press releases under embargo is a fairly fruitless exercise.

I obviously don't have access to the analytics of the various media powerhouses across the web, but it's safe to say that the reason the major players have made a point of putting every area of the games industry and the games it produces under scrutiny is because that's where the page views are.

As Anne and the rest of the team at GoodGamers.us will soon find out, if attracting an audience and covering the games industry in any meaningful sense is your aim, that means no topic is out of bounds.

Even just from a creative standpoint, simply churning out reviews and re-farming news stories from the sites lucky enough to pick up press releases under embargo is a fairly fruitless exercise.

Mobile undoubtedly has to take some of the 'blame', if that's the right word. Both iPhone and Android, like Wii before them, opened the floodgates and turned people who still wouldn't brand themselves as gamers into some of the industry's most consistent consumers.

Sites like Pocket Gamer are on the front line – aware of those wary of embracing free games or casual releases who have been taking on titles on their mobile before the App Store, but equally respectful of the massive new audience flooding onto smartphones.

In the longer term, supposed 'core' gamers are the games press' bread and butter and efforts need to be made to ensure that, well beyond the hot air that is the bulk of GamerGate, people who have grown up with games are brought along for the ride rather than being ostracised.

If nothing else, the bigger publishers will only continue to pursue games that break away from tired stereotypes if they think their target audiences are also on board.

The games media shouldn't be seen as pushing a universal agenda, but it does have a role to play opening eyes and broadening horizons: journalism should always be investigative and progressive.

But there's also nothing to be gained by writing off the 'GamerGaters' – the apparent decision of Polygon's editorial staff to mass block anyone they take a disliking to is arrogant as it is pathetic – even if the conspiracy theories touting elaborate and tenuous links people sites and writers that many are pushing are akin to a particularly dodgy episode of Spooks.

Engagement in the answer. Infuriating and needlessly aggressive as Gamergate is, this is one gate that needs to be kept ajar for some time to come.