William Volk on the interaction of influence for new inspiration 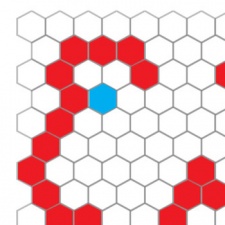 William D. Volk is the CCO of PlayScreen.

On 23 August, I was greeted by this email from a fellow employee:

And yeah, I knew EXACTLY what game she was talking about.

All about the hex

In both these turn­-based games, your goal is simple, trap the moving object.

Both games operate on a hex grid. Circle The Dot flattened the graphics and created an abstract streamlined game experience. Bigfoot was more colorful and illustrated, as befits the games of that era.

(It was also a paid games, whereas Circle The Dot is free with ads.)

So I'm kinda glad to see that a new developer 'ketched­up' to this cool game concept. Or did they? Maybe they didn't copy Bigfoot. Perhaps they copied a different game? Or they wanted the interface to be difficult for users.

Here are some player reviews for Circle The Dot.

Every one of the game interface complaints described above? I feel their pain.

Truth is, I have fingers the size of hotdogs. I can hardly type on a keyboard. Just like Homer.

Incidentally I came up with Bag Bigfoot as an homage to where I got my start in videogames, Avalon Hill, which is best known as the company that bought war gaming to the masses, starting in 1954.

Most of such board games used hex maps and our goal with Bag Bigfoot was to create a simple but challenging hex map capture game on the iPhone.

The challenge we wanted to give players was to capture Bigfoot, not try to select a tiny dot. We solved that problem. I can reliably select any hex I choose in Bigfoot. In other words, we fixed the glitch. You'll never select the wrong hex by mistake in Bigfoot.

We also wanted the game play to be fair but challenging. One common complaint with Circle The Dot is that many times the game is "unsolvable."

Well, that's not the case with Bigfoot. The game may be excruciatingly difficult, but it is fair:

So here's what we're going to do about all of this:

We're going to 'flatten' the game graphics, and release it as a free game we're calling Impossible Hex.

Oh, and it's going to have the very cool UI we built five years ago for my fat fingers. As well as a larger number of hexes and the fair but 'impossible' game play of the original Bag Bigfoot.

We've taken things a step further with the launch of this title in partnering with Magmic Inc. as the official publisher of the title on iOS. Magmic is specialist in the card, puzzle, and casual games space for mobile making them a perfect partner for release.

And since it's free, we're inviting all the frustrated players who wanted a difficult but fair game, or have man­-hands, to play it.

You can download Impossible Hex now from the App Store [link].