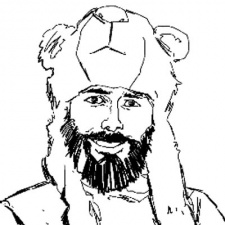 Kicking off the Indie Rock Stars track at Pocket Gamer Connects London 2015, Fist of Awesome developer Nicoll Hunt delivered some more or less serious advice on how to be a successful lone indie developer.

His first pointer was to, "invest in yourself."

The example he gave was the high quality desk and chair he forked out for when he decided to make indie games, reasoning that he would be more productive if he were comfortable. And in any case he would be forced to succeed in order to pay for his expensive new gear.

For his own part, Hunt addressed the issue of time by reducing the number of days he worked at his day job to four, giving him three clear days to make games.

For money, he ran a famously successful Kickstarter campaign, which allowed him to take a sabbatical and buy an iMac. For skills, he made a virtue of his weaknesses.

By using pixel art, he claims, he was able to make his relatively poor art skills seem like a "choice".

Beyond that, hunt also stressed the importance of working smart by using tools. Fist of Awesome would not have been a commercial success, he claimed, if it hadn't been available on multiple platforms.

Clever PR is also essential. Encouraging attendees to eschew bland corporatespeak, he gave the example of his own PR campaign for Fist of Awesome, where he divulged the game's origin as an elaborate apology to his girlfriend for forgetting Valentine's Day.

Responding to a question later in the talk, he revealed that he invests about as much time in marketing and PR as he does in development.

But Hunt reserved his most impassioned advice for the section of his talk on dealing with criticism.

"The real secret to building a one-man-team," he said, "is to not give a fuck."

Citing the example of Dave Grohl, who recorded the first Foo Fighters album on his own after Kurt Cobain's suicide, Hunt produced a litany.

If you can manage that, and afford a nice chair, success awaits.