Magic Leap decloaks to give HoloLens some AR competition 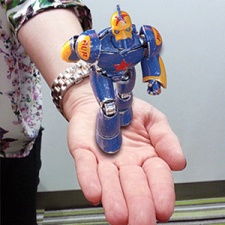 Microsoft seemed to come out of nowhere with HoloLens; a headset that in some ways is not unlike the slew of virtual reality HMDs (head-mounted displays) that have been appearing over the last couple of years.

The major difference, however, is its focus on augmenting the world around you rather than transporting you to a completely new one.

It's long been suspected that the tight-lipped technology team at Magic Leap is working on something similar, and it seems that Microsoft's announcement has put just enough pressure on the secretive start-up to encourage it to make its first reveal.

This drip feed of PR information suggests that the end result of HoloLens and Magic Leap are the same. Both are looking away from the complete immersion of virtual reality and are working toward an augmented reality goal.

Early impressions of HoloLens suggest that it delivers 3D hologramatic imagary by projecting onto a clear visor in front of your eyes, which is actually built up of material that responds to red, green and blue light (before you see the image) to create a depth of field by the time the picture reaches your eye.

There are technical limitations to this technology, though as Microsoft is yet to reveal any specifications, we don't know how - or if - it's found some novel way around these problems.

Magic Leap's big reveal, delivered via MIT Technology Review, is that it's making use of retinal projectors rather than an external display. This is a major difference, as the image is effectively shone directly onto the back of your eye from a small projector mounted beneath a lens.

Magic Leap's big reveal is that it's making use of retinal projectors rather than an external display.

According to the MIT story, this provides a mixture of the real world and digital overlay that's incredibly realistic; to the point at which it becomes difficult for the user to separate the two.

"[I'm staring at] an early prototype of the company’s so-called cinematic-­reality technology," says Rachel Metz, "which makes it possible for me to believe that the muscular beast with the gruff expression and two sets of swinging arms is actually in the room with me, hovering about seven feet in front of my face."

Both hologram systems are physically reminiscent of Google Glass, which was recently pulled from sale and mothballed.

And it's becoming more and more obvious why Google made that decision, given that it led a staggering $542 million Series B investment in Magic Leap in October 2014. Having ploughed that kind of cash into the project, you can be certain that the upper echelons at Google have seen a lot more of Magic Leap in action than we have, and realised that Glass was already outdated.

But is anyone going to wear Magic Leap on the street?

Well, that all depends on the finished product design. A timescale wasn't included in this first public outing for the AR newcomer.

Indeed, this early test was described as being a non-movable, complex lens system attached to a scaffolding apparatus. A non-working design concept of large glasses with a wired control box was shown, but it was made clear that this was just a mock-up and may not represent Magic Leap as a retail product.

According to this early test, it's not just an issue of design, but of actually figuring out how to minimise Magic Leap's projectors, lenses, controllers and sensors into something that would actually fit onto someone's face.

"It includes a projector, built into a black wire, that’s smaller than a grain of rice and channels light toward a single see-through lens. Peering through the lens, I spy a crude green version of the same four-armed monster that earlier seemed to stomp around on my palm."

According to a new report, virtual reality will have a market of 11 million users by the end of 2016, and investments in both VR and AR reached over $2.6 billion in 2014. All this, and there's barely a viable retail product on the market yet.

We can remain confident that gaming is going to lead the charge in AR, as well as VR.

This offers some perspective on the amount of work, and money that Magic Leap is putting into its system, and speaks volumes about the company's confidence in its ultimate saleability. Whenever that might be.

That same report points out that just over three-quarters of current VR content is made up of games, and it would seem that tallies with Magic Leap's efforts even at this early stage.

"Magic Leap is hiring like crazy," says Metz. "It needs optical engineers, game designers, and other people who will dream up virtual objects to display. To give you a sense of where their minds might go, I saw ray guns and magic wands lying around the office. Employees energetically describe the games, sensors, and ray guns they’re working on."

Even Microsoft made sure to position gaming squarely within its early HoloLens reveal, demonstrating how Minecraft might find a very comfortable home right there on your coffee table, so it seems that we can remain confident that gaming is going to lead the charge in AR, as well as VR.

In time the distinction between VR and AR will become clear and precise, from a user's perspective as well as a commercial one. It'll have to. These aren't just different technologies, but are different markets, much like smartphone and tablets. Closely related, but different enough that users can easily justify owning, using and carrying both.

Mircosoft won the sprint to introduce the world to holographic computing, but Magic Leap is setting the pace for the long distance game.