Throwback Tuesday: Why Nintendo's making a big mistake in not adopting Android 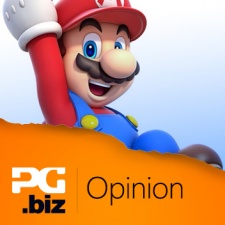 With reports stating that the Nintendo NX will be a portable, cartridge-based unit with detachable controllers, we're republishing our 3 June 2015 opinion piece calling for Nintendo to adopt Android.

At the time, this piece was a response to a quickly-rubbished rumour that Nintendo's next console would be Android-based.

But now, if these emerging details about the NX are to be believed, its warning against the "wacky brand of innovation" and inward-looking approach that killed the Wii U seems more relevant than ever.

When I first heard the rumour that the upcoming Nintendo NX console/platform was to run a version of the Android OS, I was pleasantly surprised.

I understood people's concerns too, of course.

Historically, whenever the words 'Android' and 'console' have come together - for example, Ouya - the resulting hardware has struggled to make the desired impact - regardless of how bright-eyed and hopeful its conception was.

However, think about it a little longer and Android becomes a remarkably sensible choice, despite Nintendo's public denial that it will use the OS.

With effective use, Nintendo could sidestep many of the problems it has encountered in the previous hardware generations, and open up its ecosystem for millions of developers around the world - making Sony and Microsoft look old-fashioned in the process.

Iwata has promised a “brand-new concept” for the upcoming NX.

On a technical level, Nintendo has been one step behind its competitors for the past two generations. But, with every console since the Nintendo DS, its hardware has been defined by its difference.

And indeed, sticking to his strategy, CEO Satoru Iwata has promised another “brand-new concept” for the upcoming NX.

However, 'new' and 'different' doesn't necessarily have to denote the same wacky brand of innovation. If Nintendo was to adopt a forked version of Android, in the same manner as Amazon's line of Fire products, that would rightly be considered an innovation in its own right.

The first of the so-called 'big three' to take the plunge into those open waters - even if, like Amazon, it decided to run its own curated app store -  it would establish itself as the most developer-friendly console, finally doing away with physical media, potentially opening itself up to an already-bulging library of incredible games - all this and more in one fell swoop.

Nintendo's quirky side is what makes it one of the most lovable companies around, but I worry that it occasionally manifests itself in the wrong places.

The Wii U's concept was so muddled ... it put developers off.

The Wii U's concept was so muddled, and its push toward second-screen gameplay so out of the ordinary, that it put developers off.

We are living in a time when multiplatform development is getting easier, and more widespread than ever. It's a big concern for developers.

Just as a developer in the mobile space will seek to launch on both iOS and Google Play roughly simultaneously, so too will a console dev want to release the same game on Xbox One and PlayStation 4.

Being an outlier, then, is not as attractive as it may seem.

But Iwata seems concerningly adamant that Nintendo tech should continue to distance itself from competitors, stating that "If you only expand upon existing hardware, it's dull.”

That thinking paid off with the phenomenal hardware sales of the original Wii, of course, but even there the thirdparty support quickly died away, the console eking out an existence on occasional firstparty releases in its twilight years.

This issue was even more immediately apparent in the Wii U, which now receives practically no attention from developers other than Nintendo itself.

And while it's always been the case that Nintendo games sell Nintendo systems, alone it just seems too sparse an offering.

In an edition of Digital Foundry's 'Secret Developers' series, an anonymous Wii U developer wrote that the system “seemed to be trying at every turn to make it difficult to compile and run any code.”

Overall, the developer concluded that “the situation looks grim for those of us in thirdparty development, with the opportunity to progress on the hardware held back by both the quality of the tools and the lack of financial reward.”

Sometimes, then, it seems that developers appreciate what Iwata calls “dull.”

Some level of parity with competitors, industry-standard development tools including from the likes of Nvidia - and a pain-free development experience are more important to them than being unique.

The NX will, I think, be Nintendo's final chance to court thirdparties. If it leaves devs groaning at yet another bewildering new set-up to learn and highly restrictive publishing requirement, then they simply won't bother with it.

More options than ever for games means walking away from Nintendo is not the tough decision it once was. Indeed, the shoe is now on the other foot. Nintendo needs developers more than developers need Nintendo.

Adopting Android - in whatever technical sense when it comes to distribution - would immediately send a message from Nintendo to developers: 'We made a mistake last time out, but we've learnt from it. We're trying to make your lives easier. We need you'.

The company contains quite possibly the finest group of pure game designers in the world, and that's where it should celebrate being different - not obtuse hardware.

To prevent Nintendo from retreating further within itself, it should open itself up in the most straightforward way possible - embrace the most widely installed OS in the world, and get developers excited to share a platform with Mario again.