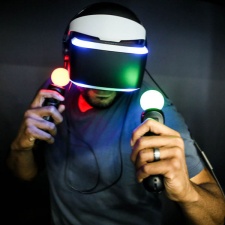 Sony is one of many firms toiling away at virtual reality headsets.

Its Project Morpheus device for PlayStation 4 will compete with kit from Oculus, Valve, and Samsung when it launches in 2016.

But as Richard Marks, of PlayStation Magic Labs explained at Gamelab Barcelona, Sony's focusing on some areas that other VR makers might be missing.

Moving in time and space

One is control. "You want to find the sweet spot between the literal (like a treadmill) and the abstract (like a controller)," he says.

For Sony, that's the PlayStation Move - a lollipop-looking wand that was made for PlayStation 3.

These "bimanual spatial controllers", as Marks calls them, gives you one controller for each hand and let's you move them in space. That way, you can reach out, grab things, and manipulate objects.

Even better is using the two controllers together. In a tech demo that simulates a getaway shoot out on a highway, you mush two Moves together to put a fresh clip into a pistol.

These controllers can also be used to move through the world in ways that don't lead to motion sickness.

"You can point and teleport, grab the world and drag through it, scale the world to cover large distances quickly," he says.

Some games will still use a controller, but Sony has an ace up its sleeve with the Dualshock 4. As the pad supports motion tracking, the controller can be rendered in game - letting the player see the joypad, even inside VR.

One demo sees virtual tool-tips popping up over buttons.

In virtual space together

Also important for Morpheus is social interaction. The PlayStation headset hopes to eschew that stereotype of VR being an inherently anti-social, closed-off affair.

"If you combine that with 3D voice chat, it's a very powerful feeling. It feels like you're there with that person, even if you're on the other sides of the world."

Marks talks about a player leaning over and whispering in his ear. "I think that's by far the most powerful experience I've had in VR, and something you can't really get from any other kind of tech."

Sony is also experimenting with asymmetric multiplayer games where one person is in VR, and other players are not.

In one demo, the Morpheus user is a giant lizard monster, fighting off robots who are controlled by players using Dualshocks and playing on a TV.

Marks's PlayStation Magic Lab is also looking towards the future.

"Eye tracking is really good for social interaction and for virtual characters to interact with you," he says.

And to improve control, the team is investigating haptics, which go beyond controller rumble.

"You can give the illusion of weight by pulling on your hand a little bit, or simulate friction to make you feel like you're bending and stretching," he comments.