My love/hate relationship with Minions Paradise

Yes, we have no bananas 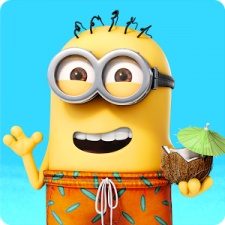 I'll be completely honest, I hate Minions. I never liked Despicable Me.

I groaned at the idea of a spin-off movie. A mobile game filled me with dread. I avoid their existence like the plague.

I have also never been one for free-to-play games.

I was a late adopter of the smartphone, and had to spend my time playing catch-up on the early premium games I'd missed, so never really gave them any time.

Not that there is anything inherently wrong with the genre, of course.

But as an outsider looking in on an industry slowly shifting its business practices, and having only the vitriol of Twitter to inform me how I should feel about this, the idea never seemed appealing.

It was something of a surprise, then, that since downloading Minions Paradise a few days ago, I have been unable to stop playing it.

Perhaps I just like making the weird yellow blobs run around doing my bidding. Maybe the part of my brain that actively tries to ignore them has given up.

Or maybe – heaven forbid – I'm actually enjoying it as a game.

It is, at its core, a fairly straightforward free-to-play management game.

You gather resources, craft items, fill orders, and complete quests. There's a lot of waiting involved, which you can bypass by ponying up a small fee. Occasionally you go fishing for alligators.

For what is a remarkably unremarkable game, there's something quite charming about it.

But for what is a remarkably unremarkable game, there's something quite charming about it.

It's bright and colourful, full of tiny jokes and cute animations, and it's simple enough that you can jump in and out throughout the day but still feel like you're making progress.

Progress is a key part of any gaming experience, no matter what the genre.

If the player doesn't feel like they're making any meaningful advancement, it can be difficult for them to want to stick around.

With my past, brief, experiences of free-to-play games, I'd regularly find myself frustrated by ever-increasing wait timers that would hold me back from the next part of the game to try and encourage me to use real-world currency in order to skip the waiting.

It makes perfect sense as a business practice, but when you're new to the idea and are so used to instant gratification, or at least being rewarded based on skill, it can be a little jarring to be told that the only thing holding you back is being miserly.

Minions Paradise neatly sidesteps this by offering its form of experience points, Party Points, as a separate resource that can be collected at the same time as crafting items, rather than wholly tying up its levelling system within the quests.

What this means is that, even when you're waiting forty minutes for a dungaree-clad banana-type thing to pick a single chilli, you can still be working towards your next party, and in turn your next level.

Which is great, because after grinding out every other part of the game for a day and feeling like you're getting nowhere, it's actually quite satisfying to watch the whole island join together to celebrate your achievement.

Don't get me wrong – I still hate Minions. Their fast-paced gibberish language mixed with occasional English words is incredibly grating, and their constant laughter is enough to drive anyone insane.

In one instance, the game froze on a party scene and wouldn't let me quit, and for five minutes their laughs filled the air, looping over one another, like some kind of nightmarish ritual in which I was a sacrifice, being laughed at by twenty small yellow cylinders.

But even a vision of my own personal hell hasn't stopped me from continuing to return to the island, even as I enter the stage where only the hardcore paying players are supposed to be.

So, thanks Minions Paradise.

I'm glad I gave you enough of a chance to change my mind about free-to-play, and acting as a gateway into a style of game I'd all but written off.

You can keep the Minions though. There's only so much inane laughter one person can be expected to take.