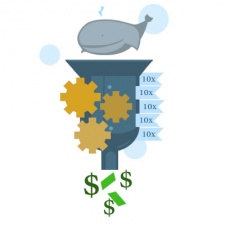 This post will be about the whole journey of the player, from hearing about your game for the first time, until they are a happily paying customer.

There are a hundred nice ways to lose them along the way. The good news is that you can see where they got lost, if you just remember to keep an eye on your players.

Falling down a funnel

When you are testing out your game, likely in some cheap and cheerful place far away from home (to make sure you're not measuring your friends), an ad is the first thing the new players are going to see.

Advertising is already a science in itself, and you will likely see more than 10x differences between your good ads and your bad ads.

I suggest you try out a few different formats on e.g. Facebook and Unity Ads to see what you can get.

At the soft launch stage, when you are only spending a few thousand dollars, you do not need to optimise every last percent out of your ad efficiency, but it is nice if you can spend $1,500 dollars instead of $15,000 to get your first measurable users.

On one of our games, we had to pay over $5 per install with one ad, but got under $0.50 with a few tweaks that only took us hours.

For one game, Facebook was clearly cheaper, while another got cheaper traffic from Unity Ads. The difference was from $6, down to $0.40.

Once you have the ads up, players will be landing on your App Store or Google Play page.

I suggest using Google Play during the soft launch phase simply because it's faster to get new versions of your game published when there is no review process.

At this stage, your gameplay video, game description, icon and screenshots will determine whether people who view you Google Play page actually download the game.

Happily, Google Play is also trackable nowadays. One early test we did there only got 2% of players who landed on the page to download the game. Another got about 40%. Again, the difference between a good and a bad version is huge - 20 times.

Once the players have downloaded the game, they are, of course, greeted by your tutorial and first game session.

This too is the subject of its own article. Suffice to say, that there is again a more than 10x difference between an OK tutorial and a good one. On our Benji Bananas game, we measured a 40x improvement for the early game during the soft launch phase.

When people have cleared the tutorial, we get to the longer term retention.

This is the most important number that you should track. An OK game will likely have a 28-day retention of only a few percent. A really good one can get above 20%. A bad game has just about 0% 28-day retention. The difference here is at least 10x, but probably more.

Last, you want to get your players to pay you. That happens only at the very end of this funnel, and with your most ardent fans.

Again, you will see a large variation between good and bad games.

Some games have Life Time Value (LTV = how much the average player pays during the months they play the game) of only about 1 cent.

The funnel goes a long way to explaining the difference between top grossing revenues, and the poor indie games.

Others get people to pay tens of dollars. That's a factor of a thousand!

Average Revenue per Daily Active User (ARPDAU) varies much less, but also by a factor of at least 10x.

In summary, this allows you to see very clearly why there is a huge difference between the games that make money and the ones that do not.

To calculate the return on investment from ad spend to revenue, you need to factor in all parts of the funnel above.

If we have five stages, where each can easily vary by 10x-50x, we get a variation of between ten thousand and half a billion.

This goes a long way to explaining the difference between top grossing revenues, and the poor indie games that make hardly any revenue.

Some indie releases get only a few dollars in revenue over their lifetime, while the top grossing games have generated up to a billion per year for several years.

Go have a look at your funnel, and figure out exactly where you could do better to know what you should improve.