Fear and eSports: How it felt to present the Vainglory Winter Season 2016 EU Championship Finals 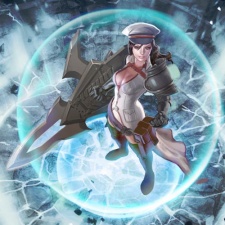 As someone who has never particularly seen the appeal of competitive gaming, I never thought I would find myself attending an eSports event at any point in my life.

I definitely never thought I'd find myself on stage, presenting a post-match segment to a live audience both in the room and on Twitch, at the first touchscreen eSports event held in the UK.

But, as it happens, that's exactly what I found myself doing at the Vainglory Winter Season 2016 EU Championship Live Finals from March 18-20.

It's a jungle out there

To say I was nervous would be something of an understatement.

Anyone who saw my first segment would almost certainly agree that it's a miracle I didn't simply faint when the camera came to me.

It took a team of analysts, presenters and stage managers to make sure I didn't fluff it.

I am not a natural presenter. Nor am I high level Vainglory player, despite my well-documented love of the game.

The idea of having to appear knowledgeable about a game to an audience of potentially thousands of people nearly had me sobbing in my hotel room the night before my big debut.

Thankfully, the team at Super Evil Megacorp were on hand to give me all the information I needed, providing helpful advice and general encouragement over the course of the tournament.

They say it takes a whole village to raise a child.

In this case, it took a team of analysts, presenters, growth experts, and stage managers to make sure I didn't completely fluff it.

It was a team dedicated to making sure that the event was the best it could possibly be, and their efforts definitely paid off.

The Gfinity Arena, which is in reality a cinema screen in London repurposed for use as a function room for eSports, may not hold many people, but the atmosphere inside was still amazing.

Everyone in attendance cheered and chanted as two teams battled it out in front of them, audibly gasping at impressive feats in battle and bursting into rapturous applause when one team wiped out the other.

It was impossible not to get swept up in it all, to join in and start rooting for teams or taking a sharp breath when the tension built.

And it couldn't have reached that level were it not for the team making sure everything ran as smoothly as possible, getting the audience hyped up, and keeping energy levels high for the entire event.

That said, a sport is really only as good as its players, and I can happily report that they were also excellent.

I mean this not only in terms of skill – although it must be said that the players were pulling off some incredible moves that I'm not sure even they thought were possible.

For such a relatively young game, it's impressive that so many teams have already worked out the ins and outs of Vainglory so well, and make being good look easy (and it definitely is not easy to be good.)

What really struck me is the community that has built up amongst the athletes participating.

But what really struck me is the community that has built up amongst the athletes participating, who were all incredibly welcoming and friendly, even to strange, scared people such as myself.

With more money entering the Vainglory eSports scene at a growing pace, and eSports organisations acquiring teams at a surprising rate, you might think that the players would be more focused on winning than making friends.

But the player's lounge told a very different story, with members of all teams chatting amongst one another, challenging each other to foosball matches, and even having quick, friendly games of Vainglory to warm up.

There was, of course, trash talk – mostly from 13-year-old participant MrKcool, who frequently informed me how much better he was than everyone else (his team lost in its semi-final) – but it was all in good humour.

So was the first ever mobile/touchscreen eSport event held in the UK a success?

From the viewpoint of someone who was there, undoubtedly.

The atmosphere was fantastic, everyone including the players had a good time, and, aside from a few technical hitches, and yours truly going missing at one point mid-game, everything ran smoothly.

And they even let an amateur like me get on stage, microphone in hand, cameraman at the ready, and make awful jokes to a live Twitch audience.

Where the next tournament will take place is anyone's guess. The teams are based all across Europe, and the first competition was in Poland so it seems unfair to keep making them come back to the UK to compete.

But even if it were to be the first and last Vainglory championship to be held in London, it's safe to say that it was an unforgettable experience.