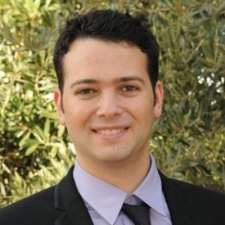 The military "is a place where you're supposed to grow up and give up on your childhood dreams."

But luckily, when he was conscripted for his compulsory service in the Israeli army, his job was to monitor the usage of others on the computer network.

"Nobody watches the watchmen, so there was nobody to stop us playing Diablo 2," he recalls.

For Ulmer, then, the association between games and war has always been significant. But now, working at Stormfall: Age of War developer Plarium, that connection has been made even more explicit.

"Strategy games have a very great connection to war," he explains, and it's clearly a topic he has put plenty of thought into.

He addresses the three levels of war, as established by military theorist Carl von Clausewitz and attempts to map their significance in a gaming context:

What Ulmer calls the traditional strategy game flow sees the player address each of these levels sequentially, first defensively and then offensively.

But particularly with the shift to free-to-play and mobile, this sequence has been disrupted.

Both tower defence titles and build-and-battlers, to differing extents, lean towards the defensive side, with little or no scope for offensive planning or individual unit control.

"I've seen people discuss the strategic and tactical levels of war in relation to games, but never operational," says Ulmer.

A lot of people call Clash Royale a tower defence game, but it's definitely not.

However, in the design of many F2P games, it's arguably the most important level. Take Clash Royale, for example.

"I notice that a lot of people call Clash Royale a tower defence game, but it's definitely not... you have to go on the offence if you want to win," he observes.

However, like many of its peers on mobile, it also limits the offensive strategy (only three lanes) and cuts out any semblance of attacking tactics (no unit control).

"So what is it about?" questions Ulmer. "It's about high-level combat management mostly."

So in Clash Royale, with the deck being "where the decision making takes place," the entire game is constructed around the operational level.

But what should other strategy game developers take away from this?

For Plarium, mobile strategy games have moved so far from that traditional game flow that going traditional is, in itself, a way to stand out.

Gates of War is the firm's soft-launched, "3rd generation social strategy... going back to the roots, a strategy game with Strategic, Operational, and Tactical levels."