Does Apple know what you want before you do? 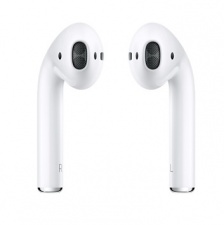 The traditional headphone jack is dead.

On the iPhone 7 at least.

In its place are multiple options for consumers.

In with the new

Firstly is Apple’s new wireless headphone: AirPods - sold separately. You just simply fit these into your ears with apparent some degree of stability according to reports.

These will also only play audio when they’re in your ears, in case you were worried they might go rogue and play music without you.

For that price and the wait, you now get five hours of listening time on one charge.

Though the charging case holds additional charge for around 24 hours.

Tacking on the old

Then there’s Apple's EarPods or other third-party headphones (a free set of earphones comes with the device) that can be plugged into the lightning port at the bottom of the phone - where you'll also need to charge your phone.

Reading the announcement of AirPods, you wouldn't even know you could actually use your old headphones anymore.

There's also an adaptor that comes free with the iPhone 7. Plug this into your lightning port, then plug your presumably existing headphones into that and you’re good to go.

It’s a bit strange that the latter has been hidden away by Apple. According to the BBC, this adaptor wasn’t anywhere to be seen to journalists on-site testing Apple hardware.

While writing this I realise I’m a bit sour, afraid of change. That’s how I imagine a lot of consumers feel right now.

It’s a big gamble for Apple. The headlines the average consumer will see will state the simple fact that it’s gone. That there is no alternative.

Reading the announcement of AirPods, you wouldn't even know you could actually use your old headphones anymore.

It's briefly mentioned in the main press release for the iPhone 7, but what consumer reads that anyway?

But what’s the real impact here?

What’s clear to me is that Apple wants to further expand its business and profitability.

But you could also argue: Why are we still using a technology, the 3.5mm connector, first created in 1964? Or has it been just that good?

I’m confused, even angry about its loss.

Maybe that's even more bizarre, in context of real-life worries, than Apple marketing chief Phil Schiller's decision to use the word “courage” to describe the decision to remove the headphone jack.

Cue what the internet does best:

When you realize you lost one of your $159 #AirPods on the subway. #AppleEvent pic.twitter.com/B0eHTKrWjN

But here’s the thing: I don’t even like small earphone wires. They're a tangled mess.

But then again, despite this, they do stop me from losing my earphones. Quite important if they cost £159 - so wires are a bit of a necessary evil in many ways.

They also keep the earphones in your ears, which can be prone to falling out (and thankfully still attached to said wires when they do).

Also, we’re likely going to see a lot of third-party headphones/earphones cropping up in a short space of time that take advantage of the lightning port, and no doubt will be much cheaper than Apple’s headphones.

But how cheap will this be? And will the expense of this, combined with the potential to have to fork out for a new adaptor or lose a tiny earphone, like the AirPod, change how people engage with audio on their phones?

And will this in turn affect even more the relationship between audio and players on mobile and lead them to switch off audio forever?

We'll have to see what happens once the phone is out in the wild.

"On the one hand you have something akin to a games console situation in that you could more likely guarantee a particular listening experience and tune your game's mix to the iPhone speakers and wireless headphones specifically," he said.

"But at the same time it means gamers won't be able to use their favourite headphones without an adaptor, which would be extra faff to contend with when out and about."

"Also games use up battery very quickly, so without being able to charge it may put gamers off using headphones altogether. We'll have to see what happens once the phone is out in the wild."

What does the future hold?

Perhaps the most concerning thing is: Where does Apple go from here?

Is this just the first change of many? Will the iPhone 8 require new AirPods? Will they change the lightning port?

Will they no longer ship the adaptor if they think consumer adoption to a wireless future for headphones is high enough?

I don’t think Apple has been able to convey succinctly why this was a good change for consumers.

I think it's also important to note that you could only watch Apple's keynote on Safari. It wants you to use its hardware/software/accessories.

And on that note, its unclear right now how the wireless technology the AirPods use could work for third-party companies.

But you could give Apple the benefit of the doubt. Maybe once again they’re looking to a future under the mantra that consumers don’t know what they want. Other than more of the same old, which isn't how Apple built the iPhone.

It's clearly too early to tell, though. Maybe it will make a dramatic turnaround when Apple realises they aren't the only game in town, and people may not want to fork out for headphones solely for us on Apple devices.

Or maybe Apple is big enough to set a new standard and change how we use our headphones in other walks of life: from plugging into the traditional headphone jack on an aeroplane to a PC, your laptop and a whole array of other devices.

The immediate future is messy and a hard sell. The long-term could change things completely.

On that note, can anyone find my AirPods? I could swear I left them on the sofa.

I've already lost 2 pair of #AirPods, haven't even bought them yet #AppleEvent pic.twitter.com/2JWy0Id40u

Chinese tech fans unimpressed by iPhone 7, but devices are selling out in the US