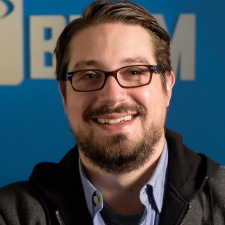 US developer Disruptor Beam has revealed that it is working on a mobile game adaptation of the original The Walking Dead comics.

Subtitled March to War, it's not the first mobile game to launch with Robert Kirkman's The Walking Dead comic licence.

Indeed, Scopely's The Walking Dead: Road to Survival launched in April 2015 and leveraged the IP for great success.

It recorded $5 ARPPDAU and 25 million downloads as of September 2016, despite the competition from Next Games' TV show-licensed The Walking Dead: No Man's Land.

Disruptor Beam, however - the developer behind Star Trek Timelines and Game of Thrones Ascent - is confident that its take on the franchise can bring something unique to the table.

But with details for the 2017-bound game still relatively thin on the ground, PocketGamer.biz reached out to Disruptor Beam's Director of Product & Design Joey Lapegna to learn more.

PocketGamer.biz: There have already been mobile games based on both the comic and TV licenses of The Walking Dead, so how will March to War stand out as its own entity?

Joey Lapegna: March to War features immersive 3D graphics and focuses on true multiplayer competitive gameplay, where survivors must actively work with and against others to gain control and progress.

Survivors must actively work with and against others to gain control and progress.

So, not only will it look a lot different, it plays differently as well.

Unlike some other The Walking Dead games, players actually have to work with each other in order to succeed (or fail) in March to War.

We are creating a massive world in which players will be able to engage with each others and tell their stories on how they survived in the world of The Walking Dead.

Similarly to how we approached graphics with our previous game, Star Trek Timelines, we have a talented team of artists working on March to War with the goal of pushing the boundaries of what people see in mobile games today.

March to War will look like no other mobile competitive strategy or Walking Dead mobile game seen before. We look forward to sharing some images from the game with fans in the coming weeks.

It seems that the gameplay is to be heavily alliance-focused. Can you explain a little about the inspiration behind this, and how exactly it will work?

The core of March to War’s gameplay centers on the social connections and dynamics between people in dire straits, just like in The Walking Dead comics and the television series.

The focus is on the rebuilding of society and we felt that creating game systems that prioritised your relationships with other players was the best way to stay true to the world Robert Kirkman has created.

In terms of gameplay, there are several elements to how you’ll work together with your alliance.

Coordinating attacks on other players, setting up trade deals and something we’re really excited about is the ability to take over key landmarks in the world that will provide your alliance an edge over the competition, if you can hold it long enough before being attacked by rival alliances.

This is just the beginning of the interactions though and we plan to heavily focus on expanding alliance gameplay and how you interact with other players after launch as well.

It seems too that The Walking Dead's story is something you're interested in capturing and expanding. How will this manifest itself and what are the challenges of storytelling in mobile games?

We believe our reason for existence is to connect people through shared stories in the games we create.

Doing it on mobile devices presents challenges in engagement and forces us to rethink the form that story takes.

A lot of what we know about storytelling fights against how players want to engage with a mobile game.

A lot of what we know about storytelling in entertainment fights against how players want to engage with a mobile game - instead of sitting down consuming long-form entertainment, they want short bursts throughout their day.

So, we’re focused on finding ways to tell stories in our games that are aligned with that play style. This is how we’re approaching March to War.

We have both linear and non-linear storytelling through dialogue trees in both of our previous games, Game of Thrones Ascent and Star Trek Timelines.

But we’ve learned the importance of creating the right gameplay scenarios to let the emergent narrative take over.

To me, that’s the real power these devices have to engage players in a story - the ability to involve them over time all through a device sitting in their pocket.

We’re really focused on the type of narratives our gameplay can create and how we can surface them to the player through the lens of The Walking Dead, while prioritising the gameplay systems we believe will allow those rich narratives to emerge.

How and when did the relationship Disruptor Beam and Skybound Interactive begin for this project?

After we had already been working with HBO on Game of Thrones and with CBS on Star Trek, The Walking Dead was on the top of our list for our next property for a few reasons.

It had an existing passionate community of great fans; it really fit our vision of telling stories with rich characters; and we are enormous fans ourselves.

We approached Skybound after being introduced to Robert Kirkman through a previous partner and the rest is history.

How big of an advantage is it for Disruptor Beam to have already worked with adapting major IP in Star Trek and Game of Thrones? What learnings from those projects will you apply to March to War?

Our experience with licensed mobile games is a huge advantage when it comes to successfully adapting a major IP like The Walking Dead.

We’ve learned a tonne through the process of developing and operating Game of Thrones Ascent and Star Trek Timelines.

We work hard to make sure all of our games stay true to the source material.

We know these franchises come with big expectations from fans and we work hard to make sure all of our games stay true to the source material.

Authenticity is extremely important to us, and for it to be apparent in our work, it needs to be more than just a word we use. It’s ingrained in how we work, make decisions, treat each other and handle the source material we’re working with.

The constant wrestling with morality in The Walking Dead isn’t lost on us; we are creating a world in which players are tasked with the tough choices that come along with rebuilding a society and staving off the looming threat of attacks from other players.

We are also making sure we allow players the ability to enlist the help of fan-favorite characters such as Rick, Michonne and Negan.

From a development perspective, we’re utilising a lot of shared technology that is common in many mobile games from our previous titles.

This allows us to focus much of our efforts on building a game that is authentic to The Walking Dead.

Our arsenal gets bigger with each game we create and we’re doing some really incredible things in terms of graphics technology in this game.

How does The Walking Dead: March to War differ from your previous projects?

Game of Thrones Ascent was originally built to launch on Facebook, which we then adapted to mobile devices.

The game is focused on resource and character (Sworn Sword) management, with heavy dialogue and narrative trees. It taught us the importance of characters in these games.

We took that learning and applied it to Star Trek Timelines, which is immensely focused on character collection and management and features hundreds of well-known (and sometimes not-so-well-known) characters from Star Trek.

The Walking Dead: March to War is focused more on competitive gameplay compared to any of our previous games, but the common thread between all of our games are elements of role-playing, strategic gameplay, emergent storytelling and compelling characters.

The Walking Dead: March to War will be no exception.

How closely will Disruptor Beam and Skybound be working together on the game? How do the two companies keep in regular contact?

We’re working very closely with Skybound as the game develops. March to War is based off of the acclaimed comic books by Robert Kirkman and it was Kirkman that greenlit the initial deal.

It was Kirkman that greenlit the initial deal.

To this day, he and the rest of the team at Skybound is involved.

We’ve been meeting with their team regularly to review progress and discuss future direction and that will likely pick up even more as development progresses.

We have a shared goal, Disruptor Beam and Skybound: to deliver a game that is both authentic to the comic series and is something that fans will enjoy for years to come.

When do you expect the game to hit soft launch?

For now, all we can say is that The Walking Dead: March to War is set to launch sometime in 2017.