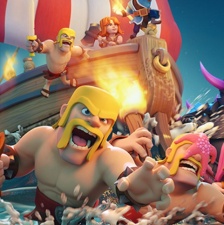 Clash of Clans is a household name for most smartphone users, and for games makers, a perennial face on the top grossing charts.

For years, the base-building, clan-battling midcore phenomenon has retained players more successfully than almost any game released since the iPhone was introduced. Supercell has achieved this without major changes to the core loop and with updates focusing on additional troops, balance improvements and features that drive additional social gameplay.

So when the developers placed a mysterious new building on Clash of Clans bases, players were rightfully excited. The building - a capsized ship situated on the eastern shore - was placed without context except for a small teaser video

For weeks, Supercell dripped additional clips, riling up the community which speculated wildly on what new features the vessel would unlock. But one thing was certain – that after almost five years since the game was released, it was getting the biggest update yet.

Enter: The Builder Base

When the long-awaited update finally dropped, player were able to fix-up the boat and travel far across the ocean to their new home: a second base which Supercell calls the Builder Base.

When players first visit this area, they will realize three main takeaways. First, the base appears to be laid out largely the same as the traditional village, as far as the main aspiration and core loop is concerned.

Players need to construct buildings, upgrade them to improve their capabilities and train troops to engage in battles against other players.

Secondly, while everything may look the same, mechanically the game operates very differently. From where players acquire the majority of their resources, to how the battles are structured, everything is familiar but the underlying mechanics have all been redesigned.

And lastly, Supercell reset all progress to zero for this new area. Regardless of their original investment of time and money in Clash of Clans, all players enter the new base as newbies.

While clashers can play both the traditional base as well as the new builder base, resources are not shared between villages, and trophy rankings are completely distinct. This is about as close to Clash of Clans 2 as we’re likely going to ever see. More on that later.