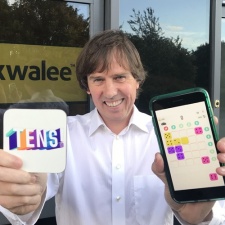 David Darling is CEO of Kwalee.

"The more things change, the more they stay the same."

It seems unlikely that the 19th century novelist Jean-Baptiste Alphonse Karr was thinking about the incredible similarities between the early days of home computer game development and the modern mobile landscape - but I’ll certainly give credit to the man for coming up with a relatable proverb.

At Kwalee, we’ve recently taken a keen interest in the hyper-casual mobile games market and looked to stake our own claim on this fast-paced, innovative section of the mobile space. The first fruits of that new focus, TENS!, was recently launched globally and we’ve been delighted by the response we’ve seen to the game.

Focusing on the fun

What’s made the process of creating TENS! and other hyper-casual games of its ilk so enjoyable for me is the incredibly simple design methodology behind it all. In more ways than one, it brings back many a fond memory of my time spent developing for the Commodore 64, VIC-20, PET and Sinclair ZX Spectrum in the early to mid-80s.

Without letting my rose-tinted glasses overwhelm me - development during this period was simple, innovative and had a ‘hacky’ feel to it that made the entire process wonderfully creative. Teams of just a few people would spend an equally small number of days strapping together basic games that relied on pure, fun, mechanics.

For those who’ve spent any amount of time at a game jam, or developed their own quick and easy games, the idea of honing in on a simple fun mechanic is likely to be very familiar.

At Kwalee, we’ve jumped into this process with both feet - creating elegant, enjoyable games in a very short amount of time, then testing them in the real world and focusing once again on only those that perform very well.

Admittedly, we didn’t have such a robust system for analytically testing our games back in the 80s - the thousands of players we now use to test our games were replaced by the rather biased opinions of our friends and family.

Yet the design and development principles are still very much the same:

As the days of simple development for the PC slowly morphed into the million dollar console industry, a lot of that elegance of design was lost.

At Codemasters we quickly went from games created by just one or two people, to the likes of Colin McRae Rally being developed by a team of 90. Of course, even that size pales in comparison to the hundreds and even thousands of staff on hand for modern console games.

There’s no doubt that a lot of the elegant simplicity of design was lost during that change. Sure, fun core mechanics were still the foundation on which you built a successful console game, but often the ideas were (and are) so complex that you could easily lose the basic ‘fun-factor’ if you weren’t careful. Getting lost in superfluous padding is a common issue, even today.

Despite all of that, here we are once again in 2017 - in a mobile gaming landscape that is currently dominated by hyper-casual games to which superfluous padding would be a recipe for disaster.

The likes of Ballz, Space Frontier (Ketchapp obviously being the perfect example of hyper-casual done right) and our very own TENS! feel like titles that have come full circle from the days of playing Galaxian and Space Invaders at the arcade.

Of course, there are some interesting differences to be noted. The way that people play mobile games stands in stark contrast to playing habits for those on computers in the 80s.

Most mobile gamers’ play sessions today are shorter than the time it would have taken to boot up a copy of BMX Simulator on the Commordore 64.

That obviously leads to some changes in how we design our games - focusing on addictiveness and simple tutorialisation all in the name of boosting retention rates.

Another key difference, and something that I touched on briefly before, is the astronomical difference in scale. When my brother and I launched our first games company, Galactic Software, in around 1981, we were still posting games by mail order to customers almost exclusively in the UK.

As such, we liked to think we knew our market pretty well. Jump forward 30 years and we’re developing games that need to have true global appeal.

In today’s mobile market it’s possible once again to have a simple idea and grow it into something groundbreaking.

Super Robin Hood (our first published game at Codemasters) may have worked for a western-focused audience who are familiar with the stories of Robin and his merry men, but would the theme hold up today in a global landscape? Much better to call your game Bowmasters and only hint at the men-in-tights theme.

In reality though, what’s incredible about the huge increase in scale is just how little things have changed despite it. We may be selling our games to millions rather than thousands of players, but the fundamentals of fun have more or less stayed the same (or at least, returned to old form).

In today’s mobile market it’s possible once again to have a simple idea and grow it into something groundbreaking.

I’ve been constantly blown away by the incredible raft of weird and wonderful ideas produced by the team here at Kwalee - and indeed the mobile industry as a whole.

The innovation and constant iteration that made my early days as a game developer so enjoyable lives on in this burgeoning sector of the entertainment space.

I couldn’t be happier to be back to where it all started.