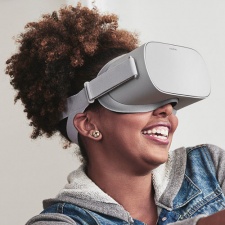 You can’t fault Mark Zuckerberg for putting his mouth where his money is when it comes to virtual reality.

Three years after dropping up to $2 billion to buy Oculus, he’s now front and central when it comes to revealing VR technology that actually has a chance of going mass market.

Significantly, the announcement of Oculus Go wasn’t about the technology though.

Sure, the all-in wires-free headset is doing plenty of smart things, even if it is dropping six degrees of freedom head tracking for just three. But the headlines were all about the price.

$199 is certainly affordable, especially compared to $599 for the original Rift, sans compatible PC and Touch controllers.

No doubt, this is heavily-subsidised pricing from Facebook, which will either be restricting supply to limit overall losses or, more likely, aggressively marketing to generate high demand to drive down unit costs.

Oculus Go’s announcement was all about price, not technology.

Yet given the messianic hype VR has generated, I wonder if hardware price has been the key factor in holding back a technology which underperformed already-low-balled 2016 revenue expectations by 40%?

As anyone who writes about technology well knows, predictions are a fools’ errand. The future is way too unpredictable for anything more than a 12 month horizon to be meaningful.

On that basis, graphs that suggest the VR market will be worth $20 billion by 2020, or the combined AR/VR market worth $100 billion by 2021 are clearly too embedded with yesterday’s thinking to offer more accuracy than the twice-a-day odds of a stopped clock.

What’s more interesting - and difficult - to think about is how the VR market could reach such valuations, and notably why people will use technology at that scale.

The existence of a technology is no guarantee anyone will use it.

For, as recent examples such as 3DTV and smart TV demonstrate, the existence of a technology - even something like smart TV that’s given away for free - is no guarantee anyone will actually use it.

Conversely, the rise of the mobile phone and then the smartphone show just how fast and how mass market expensive technology can go. Oft forgotten now, there was a lot of societal pushback against mobile phones in the mid to late-90s, and this despite the clear advantages being able to talk to anyone anytime provided.

Ironically, the rise of smartphones came at the cost of talking to people. Instead, mobile computing enabled developers to package existing experiences - online news, music, photography, Facebook - in a more accessible fashion. The app economy was born.

(Interestingly, although demand for early smartphones was strong, the industry ensured accelerated adoption by psychologically ‘giving them away from free’ by charging over a lengthy contract. Unit price itself wasn’t reduced.)

In that context, the very raison d’etre for VR becomes harder to imagine. Games? Yes, but it’s not like the world is lacking ways of playing computer games. At best, VR gaming is a technology that will replace not supplant existing gaming formats.

For me, the fiddly nature of using VR outweighs the advantages.

No, for VR to go mass market in the near future we should be thinking about the ways in which VR will have your mum/dad/grandma/grandpa (i.e one or two generations older) grabbing your headset and wearing out the battery.

That’s a difficult use case to imagine.

For me, the only VR content that’s remotely met such a requirement has been watching linear VR videos.

Granted, I’m way down the VR peaking order using a Google Pixel phone and Daydream headset, but viewing sports action and touring around historic locations and museums has provided me with a genuinely new experience.

The downsides - having to deal with standalone headphones, frequent technical gremlins that require taking the headset off, removing the phone, fiddling around with the phone, putting it back in the headset, putting the headset back on etc, a phone that gets very hot, the fact you can’t interact with other people in the room while watching, the sheer physical uncomfortable nature of wearing the thing for more than five minutes - means I’ve not used VR for months.

Of course, I can’t say how typical I am in this regard, but for me, the fiddly nature of using VR outweighs the advantages.

Having an all-in headset with integrated headphones priced at $199 would solve some of those problems. What I’m not sure it solves, however, is the question of whether VR can be more than watching linear experiences or gaming.

Despite its ill-judged tone, one thing Mark Zuckerberg’s ‘tour’ of hurricane-hit Puerto Rico did demonstrate was the potential for VR to enabling new types of content generation.

And while the holy grail of VR-enabled social spaces remains elusive, I don’t think it can yet be labelled illusive.

As VR’s hypes leaks to AR, so VR’s advantages as a social tool is thrown into deeper relief.

Indeed, as VR’s hypes leaks to AR, so VR’s advantages as a social tool is thrown into deeper relief. AR has more obvious applications in terms of combining worlds, and seems certain to be the much bigger market on a dollar-basis, but it’s fundamentally a solo visual experience.

Despite the surface having hardly been scratched, VR’s community potential remains, but - with a nod to the fate of the stopped clock - it’s becoming harder to picture a world in which every home has and uses a VR headset, no matter what it costs.

Conversely, a world in which everyone wears some form of computer-augmented glass looms into focus.

Zuckerberg needs to worry less about price, then, and think more about how VR can be wider than gaming and deeper than Facebook Spaces.

For, five years on from its Kickstarter, and 18 months from Oculus’ launch, the vast majority of people are no nearer seeing any reason why VR might matter to them.

For more on the world of VR, AR and XR, visit our dedicated B2B website TheVirtualReport.biz.