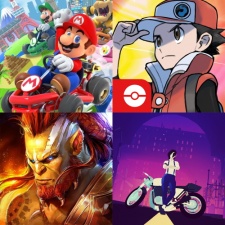 To borrow a phrase, we’re not just dry number-crunchers here at PocketGamer.biz (we’re quite moist, actually). We don’t just write about mobile games - we play them too.

After all, how can one truly understand an interactive form of entertainment if one does not interact with it?

We play as many games as we can get our hands on, whether they come from the big hitters like Supercell, established brands like Call of Duty and The Elder Scrolls, or as part of Apple’s ongoing Arcade subscription.

And 2019 has been a fabulous year for big, exciting mobile games from all of these sectors. So, you might ask, which ones are the best?

Granted, one game can’t be objectively better than another - one man’s trash is another man’s treasure, to borrow another phrase - but everyone has their favourites, and we thought we’d share ours.

So grab a nice warm drink, settle into your comfiest seat, and let us remind you about the great games of 2019 with our favourites of the year.

Mario Kart Tour does what all great mobile games based on established console games do - boil the essence of the main series down in a way that makes it fun to play on a smaller screen.

This isn’t Mario Kart as you know it. Sure, it has the pace, the items, the characters, the courses, and the music, but actually playing it is a whole different beast.

You don’t even need to win to progress, as the game instead rewards you with stars based on how many points you accumulate. Winning nets you more points, of course, but you can still scrape by without nailing first place every time.

And that makes for a far more effective compulsion loop than a traditional Mario Kart race. Instead of charging on ahead in search of victory, I’ve been repeating the same tracks several times over to nab more points and earn more stars.

It’s a game that you pick up planning to just play one or two races, before blinking and realising that you’ve spent half an hour clearing championships. And then you do the same thing again the next day. And the next.

Mario Kart Tour got plenty of flak when it first launched - none of which seems to have stopped invested gamers from pouring their money into it - but as it evolves over time with new tracks and the upcoming online multiplayer, I’m sure we’ll see more people returning to give it another go. And they absolutely should.

2019 has once again shown the prominence of mobile, with more big-name IP making its way to the platform than ever before. Call of Duty has obliterated records while Nintendo has continued to experiment courtesy of Mario Kart Tour and Dr. Mario World. But DeNA's Pokemon Masters hit stores at the right time and has continued to keep me interested four months on.

I love Pokemon. There’s no denying it. I’ve put countless hours into Pokemon GO and probably will continue to do so as long as Niantic keeps up the much-improved work shown throughout this year. Truthfully though, the game is nothing like the mainline series - and that’s where Masters comes in. Again, it’s not entirely a carbon copy, but it’s slimmed down a lot of the mechanics and made the transition to mobile seamlessly.

The battle mechanics are super (effective), while also giving interesting tidbits about characters that have featured throughout the series. Alongside Let’s Go Pikachu/Eevee on Switch, I’d argue Pokemon Masters is the closest we’ve had to the anime.

DeNA even went one step further than the latest mainline series entries, Sword and Shield, with the implementation of voice acting. By doing this, it helps give further life to personalities and proves that its console counterpart should take the risk.

Overall, it’s an extremely fun, perhaps simple, but satisfying entry that never looks to take advantage of your wallet. An essential download for any Pokemon fan that has been "searching far and wide" for a solid experience on mobile.

After three years of fairly constant daily play, 2019 was the year I finally said goodbye to EA's Star Wars: Galaxy of Heroes.

It was the first mobile game to take many of the deep meta and monetisation mechanics honed by Asian RPGs and package them up into an accessible form for western audience.

Despite the release of graphically better and arguably more polished turn-based RPGs (notably Marvel Strike Force in 2018), Galaxy of Heroes managed to keep itself relevant, not least through a decent Alliance structure.

But eventually everyone churns, and I think that would have been the situation for me even if Plarium's Raid: Shadow Legends wasn't released, but it was and that was bye-bye to Star Wars: Galaxy of Heroes.

This is not to delineate Raid as merely a replacement product: while I'm sure it is for many players, it's also so much more.

In particular, its scale both in terms of the number and graphical quality of its characters, and the depth of its meta is incredible.

I've been playing it daily since its May release, and it's yet to become a grind. Indeed, what's become apparent is how just smoothly it reveals higher level goals to achieve the more you play.

This is true both in terms of the relatively short story campaign for new players, through to the PVP Arena, where players are forced to think more tactically about how and when to use their characters' skills, and strategically about long term squad composition and gear loadout.

Indeed, I've even investigated the value proposition offered by the game's IAPs; something I didn’t do with Star Wars: Galaxy of Heroes.

A free-to-play mobile gamer spending money - you can't give higher praise than that.