Industry veteran Kelly Vero gives her answer to a critical question: what is it like being a woman in the games industry? 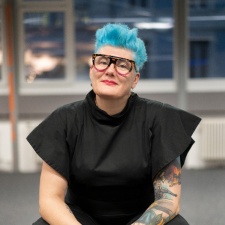 On and off because, although I've always had a loving relationship with the games industry, sometimes I’ve had to go off and do something else - military, journalist, educator, novelist - to pay the bills.

I moved to Switzerland in 2017 with my partner during a burgeoning games development movement in the country. But at the time, there wasn't enough to sustain an industry outside of the usual brass plate publishers, and hadn’t claimed a triple-A title until Farming Simulator (yes, it’s a Swiss game). I worked with the national government to find new ways to develop talent and create a healthy games industry through funding opportunities, and it was instrumental in where I am today.

I am CTO, or more specifically chief metaverse officer, of Aequaland, an educational metaverse aimed at children between the ages of six and 11 years old studying under the English National Curriculum, across some 2,000 schools, authorities, and institutions worldwide.

Our modus operandi is simple: young people play games in school (can you imagine that?) to learn science, technology, engineering, and mathematics (STEM), 21st century skills, and solid day-to-day practices: from technology and problem solving to finance and even cooking. Our mission is to disrupt education through games and ensure that every child has access to education regardless of their location or means.

We’re helping to develop individuals of the future with the actual skills they need to be the best global citizens rather than just kids hooked on shooters - though I am partial to a bit of Rainbow Six Siege myself.

More importantly, Aequaland is, to our understanding, the only female-founded, funded and led metaverse/technology/games business in the world. That is quite a big statement to make, and it carries its own responsibility.

Let’s talk about the tech and games landscape industry. It’s always been male-dominated, which is bonkers considering the mobile market, where women are as large and significant a player base as men.

When I first started working in the games industry 30 years ago, there weren't a great deal of women who were working as designers or coders: I was one-third designer, one-third coder and the remainder chief tea maker. Three decades later, the industry is in a stronger position in terms of equality and levelling the playing field. But we could do so much better.

One of the areas that needs the most love, in terms of developing and fostering better relationships between men and women, and the overall opinion of people working in this industry, is role models.

There aren’t many female role models who actually have hands-on technology experience of building games in this space. This is by no means a reflection on the myriad fantastic women experienced in leading, marketing, or driving business operations, etc – until you've actually cried over a line of code and you’ve been unable to deliver upon it, or you have absolutely destroyed an entire development team (yeah, I did that), or walked away from a project that you really love (hello?), or you've had incredible success with a runaway game that gets picked up by a giant publishing company and everyone becomes a supercar owner overnight - until any of those things have been achieved by anyone, or you made something from start to finish with your own hands, I don't think that is possible to think or believe that there are suitable role models in this space for men or women.

Who are my role models in this space? Well, my co-founders for a start: Alma Moya Losada and Lucy Antrobus. After Alma bullied me to join Aequaland, she and Lucy pitched to me the idea of working as their CTO, I jumped at the chance!

But initially, joining Aequaland was a cautious no-brainer, an odd oxymoron. If you know me, you know that I'm all in or completely out; there is nothing in the middle. Not because of the product itself (although making your own game after 30 years of making games for someone else is pretty ace), but because of the environment that I was going to be working in.

The caution came about because I'm used to working with guys. Working with and being invested in just women seemed really alien to me. I'm so used to seeing guys in boardrooms with folded arms telling me that my ideas are crap or that I can’t do this or that. So today still feels almost like a dream - I have to pinch myself regularly to accept the fact that this is real - and, as a female-fronted team, we're all pulling towards the same goal together, with a determination to bring something beautiful to 21st century learning, so that's where we are today.

We’re about to close our first round, and it has been so refreshing to be supported by everyone worldwide, from small angel investors to the almighty power of a tech giant: Microsoft is our technology partner and joined us from day one with the belief that more women need to stand up and be counted in the tech and games industry.

It’s also important to note that Aequaland is made up of women who have both relevant game experience, and none whatsoever; everybody from our CFO, and our lead investor all the way to our game designer. I felt that that was important to assist Alma in her mission of building a team where we're not bringing our egos into the game.

What is it like being a woman in the games industry? I always answer very simply, it's absolutely fucking brilliant.

What we're doing is bringing our life experiences into the game. Don’t you think that's a really good thing to build upon in the games industry? Some of the greatest game designers that I've met aren't game designers at all; they are architects or barbers or chartered accountants and saw an opportunity to make a difference. That’s how great games are made. Isn’t it awesome that you can create fantastic products with people who have a handle on life and are not just stuck in the minutiae of coding and development? Our wider lives give us meaning and something to lean on, and something to bring to games.

As a woman first, and a game developer second, I like to lean upon the experiences that I have outside of the games industry. I've done that with all the projects that I've ever worked on, whether I'm writing about a character, or coding out a payment system, all of these things that happen outside of my day job are vital to being able to make games worthy of you playing them.

At Aequaland, we have a fantastic work-life balance, where we talk about everything: not just code pain points, blockers, agile development, working with third parties, publishing, or monetisation: we also talk about other things. We talk about periods, NFTs (I’m one of the leading thinkers and contributors to this space), or the latest BTS album, a Netflix series that we're watching - anything and everything, really! We also talk about everything from adoption and greed, poverty, victory, and empowerment. And all those things you will find inside our game represented in one way or another from the perspective of the player, with the player at the beating heart and the focus of the game, because I believe that games are life.

Therefore, you’ve gotta live your life. If you don't pay close attention to your life, you have nothing to bring to a game. That, and being a woman and working in the games industry, might be one of the things that is making the working environment more of a level playing field. Additionally, there’s more of us in the industry now and that means role models we are active and able to be able to support you, regardless of your gender, into a position that you feel the most comfortable in and where you can be the best version of you inside this beautiful games industry.

So, when people say to me, "what is it like being a woman in the games industry?" I always answer very simply, it's absolutely fucking brilliant.

Last chance! Invest in your professional development with one of next week’s MasterClasses

Why no one is more important than the player