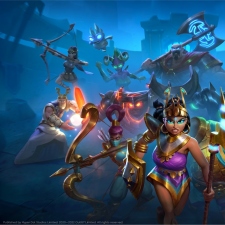 Eran Alboher, Studio Art Director at Outfit7 writes for PocketGamer.biz on his approach to creating and selecting the perfect art style for the studio's original new title, Mythic Legends.

The idea for Mythic Legends came from our internal pitching system and, once the management team in Cyprus greenlit the project, teams all across the company got to work.

The Mythic Legends project was really big for the art department. We’d never said yes to such a huge number of characters! We created over 60 characters and each one was animated differently to reflect their Class and Origin, with dozens of animations for each. In the early days, we did wonder how we’d be able to pull the project off. But we made it work!

Once we’d kicked off the project in earnest, the team worked hard to establish a working process that was highly productive and pragmatic, ensuring we created high-quality visuals at high speed. It took us about two months to get sorted, but then it was a well-oiled machine! We found great ways to streamline the process and create strong visual identities for the characters. After a while, it was only taking me about six hours to create each character.

The Product team had a really strong, clear vision right from the start, which we used as our visual direction. And after a great deal of market research, we knew exactly what we needed to grab a player's attention and how to make the game stand out from the crowd. Easy-to-identify characters and a clear, striking design were key. It was a thrilling process – partly because it was new for us. There was a lot to learn. But to have that level of challenge was a very rewarding experience.

I didn’t use any references when designing the visuals. To be honest, I never do! I just draw and draw, and then draw some more. For 30 years, art has been an inseparable part of my life, so it comes very naturally. It’s the same for so many artists in the industry – you’re always doing it, it’s like working out! Your artistic muscles need to be stretched and refined, just like your body’s muscles, and from that, you can get a creative ‘pump’ going that leads to some of your best ideas.

Even just at the level of the game’s color palette, it was great to experiment with visual diversity. There’s so much variety, from the seven Origins and nine Classes to the 60+ characters.

One of our main aims with the game’s design was to make it accessible for players. We wanted them to be able to tell, just by looking, what kind of character was on the Battle Board and what each one could do. So, for example, Knights have a prominent square shape worked into their design, while Wizards have more of a pointed shape on their character model. This kind of visual signposting helps ease players into the core experience and naturally find their rhythm as they play.

We’re now working on new content for the first year of updates, which is exciting. As with any game of this genre, you need a constant and enticing stream of content for players. Another four Origins are on the way and maybe another Class down the line... You’ll just have to wait and see!

Audio production in times of pandemic

Remote Working: How an all-day "Zoom room" is helping Tag Games to communicate