Gameloft pushed down to fifth place in our review scores aggregator 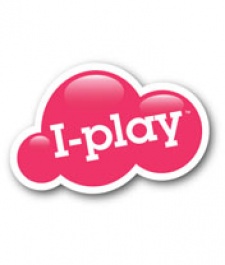 July 21st, 2009 - 03:46pm
By Stuart Dredge, Contributing Editor
I-play sits at the top of our iPhone Quality Index for the second quarter of 2009, based on review scores on nine of the top iPhone game websites.

The publisher scored an average of 8.02 out of 10 across ten reviews, beating EA Mobile into second place - although the latter's average of 7.66 from 60 reviews is mightily impressive.

Glu Mobile, Chillingo and Gameloft round out the top five. The chart includes publishers whose games notched up more than ten reviews on the sites covered during the quarter.

The full table is below, followed by some analysis, and an explanation of our methodology. And for the chart of individual games, click here. 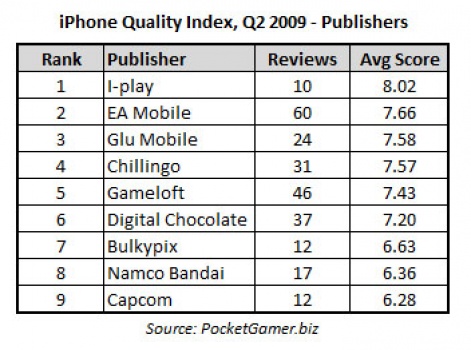 Without wishing to disparage I-play, its position at the head of the chart is largely due to Fast & The Furious: The Game, which garnered an average score of 8.20 from seven reviews.

However, EA's average score was actually DOWN 0.16 points on the Q1 Quality Index, when it had an average of 7.82. The company's least-liked game in Q2 was Mass Effect Galaxy, with an average score of 4.50.

It was an impressive Q2 for Glu Mobile on quality grounds, though, with Glyder (8.68) and Build-a-lot (7.83) particularly appreciated by the critics, contributing to its average of 7.58 for the quarter.

Glu didn't really have any stinkers in Q2, although Cops & Robbers scored an average of 6.43 from its six reviews.

Chillingo muscles its way into fourth place with 7.57, slightly down on its Q1 average of 7.65, but doing well with Toki Tori (9.10) and Defender Chronicles (8.43) in particular.

And Gameloft? The publisher is used to being higher up PocketGamer.biz's Quality Indexes - its 7.43 average score for Q2 is quite a drop from the 8.05 it had in Q1.


Get more expert analysis from the PocketGamer.Biz Mobile Game Trends Report
Put together by the expert analysts and journalists at PocketGamer.Biz the report includes analysis of key financial data and publisher performance, special reports on social media and Android, a guide to iPhone game marketing and a look ahead key trends, events and launches in 2009. For more information, click here.