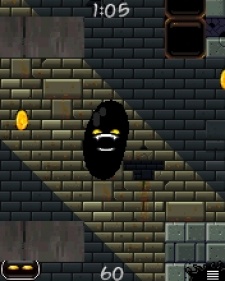 July 27th, 2009 - 03:45pm
By Stuart Dredge, Contributing Editor
Digital Chocolate was the top mobile games publisher in the second quarter of this year, according to our latest Quality Index chart.

In 24 reviews, DChoc scored an average of 8 out of 10 for its games, with California Gold Rush (8.60) and Diamond Islands 2 (8.38) particular hits with the critics. The full publisher chart runs thus: 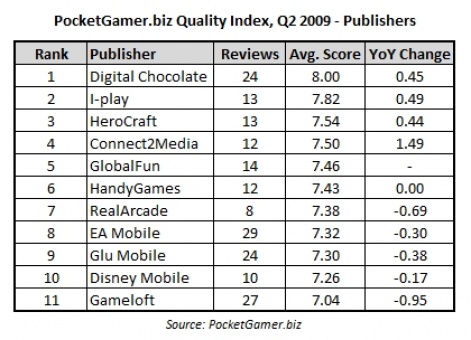 However, it'll be less so for the big guns: EA Mobile, Glu Mobile and particularly Gameloft, which props up the chart for Q2 2009.

Some clarification may be required here. 7.04 is still a decent average, even if it is 0.95 points down on Gameloft's score this time last year. However, the publisher had four games with a sub-7 average this time round, dragging its average down.

The chart of games is actually topped by a title that's as indie as they come: Gish Mobile. Developed by Hardwire and published by GlobalFun, it scored a mightily impressive 8.90 average.

The full games chart - which only covers games reviewed by three or more of the tracked sites during the quarter - runs thus: 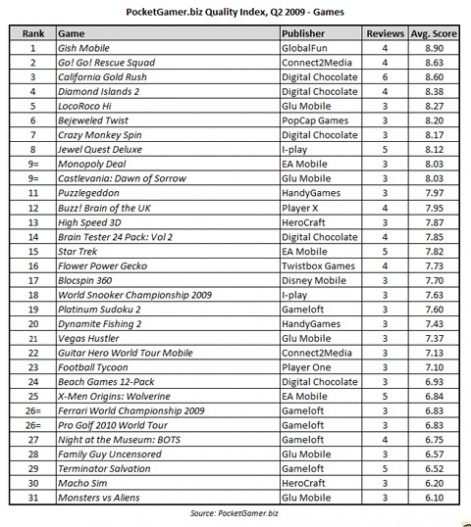