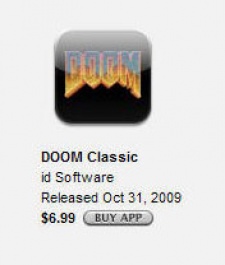 November 9th, 2009 - 06:11am
By Jon Jordan, Contributing Editor
It's been a while since I undertook any App Store Analysis, and in the meantime there have been some fairly significant developments.

Well, at least one - the successful launch of the first mass market freemium game - ngmoco's Eliminate.

This free-to-play game launched a week ago and since then has risen effortless to the top of the US Free chart, as well as bouncing around the US Top Grossing chart.

Of course, its chart position is more volatile than other games because players don't have buy extra power cells (priced at between 99c and $39.99 depending on your bulk purchasing decision) to play Eliminate, only to have their game rank in terms of being awarded in-game credits - the levelling up mechanic.

Such an impulse purchase decision means sales tend to rise and fall with the real-time concurrency of online players.

Additionally, Eliminate's release as a free game means it wouldn't be covered in my normal Paid chart analysis, so with that in mind, I've decided to take the opportunity this week to compare the two charts.

The most obviously point of contrast between the two charts is their average price.

Clearly the Top Grossing average is much higher: $4.96.

This is because 99c games have to sell huge volumes to compete with more expensive titles. Indeed, in order to feature in the US Top Grossing chart at time of writing, 99c games had to be within the Paid top 30 to be selling sufficient volume.

This difference in average price can be further analysed by looking at the price distribution between the two charts.

As usual, the Paid chart is dominated by 99c games, with 42 of the Top 100 priced at that level. (Actually, this is somewhat less than it has been in previous weeks and months). 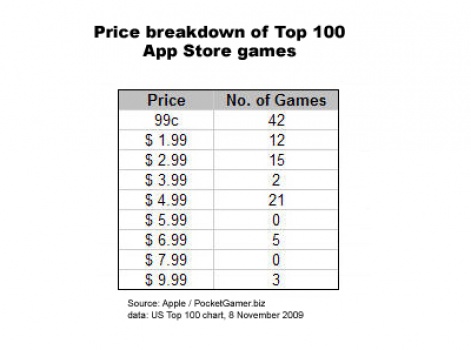 The sweet spot for games on the Paid chart is either $1.99/$2.99 - generally for unbranded games from smaller developers or publishers - or $4.99 for the larger outfits.

When it comes to the breakdown for the Top Grossing chart, everything is different. Demonstrating the problem for small developers operating in the 99c space, only 17 of those 42 99c games listed in the Top 100 make it into the Top 100 Grossing chart.

The free game is obviously Eliminate. 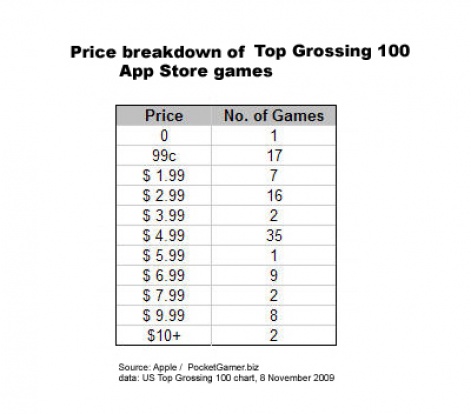 Instead, the Top Grossing distribution is weighted toward more expensive games, with in mode price (most popular) being $4.99 with over a third of the games priced at that level, and 22 percent more expensive.

The rich shall be richer

To really see who's making the most of this opportunity, we have to consider which publishers are most popular in both charts.

(Note, I only list publishers with 3 or more games in the respective Top 100s.)

It's no surprise to see EA Mobile and Gameloft sitting at the top of the charts. Both are hugely well resourced mobile publishers with strong links to the wider gaming market and hence access to game and sports licences that few others can compete with. 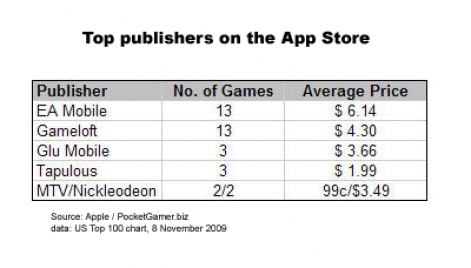 What is more significant however is that in terms of number of games and the average price, both companies do better in terms of the Top Grossing chart than the Paid chart, demonstrating their growing numerical and financial stranglehold over the App Store. 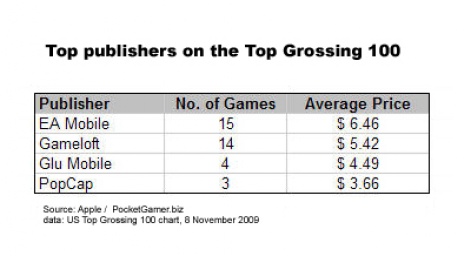 On a much smaller scale, Glu Mobile offers a similar tale. With access to licences - notably in this case Family Guy and World Series of Poker - it can leverage more money out of the App Store than its rivals.

Tapulous is one of the few publishers to have made its reputation purely on the iPhone thanks to its Tap Tap Revenge music games.

PopCap has successfully, and carefully, brought some of its casual gaming licences such as Peggle to the App Store, while MTV and Nickleodeon is another cross-media play, with Nickleodeon operating in higher priced licensed games while MTV releases quirky, viral 99c games.