Mobile advertising click thru rates on Android double in a month

Smaato points to surge in Droid and Nexus One use

The reason is that Nokia phones are the dominant devices in developing markets where mobile advertising is a way of getting around the low volume of purchased apps.

Smaato's latest research suggests the growth of Android phone is changing that picture when it comes to western markets however.

The rise of the robot

Compared to a CTR of 65 in December 2009, the rate for Android smartphones has now more than doubled to 163.

Smaato says this is partly down to the massive increase in activity on Motorola Droid and Google Nexus One devices. 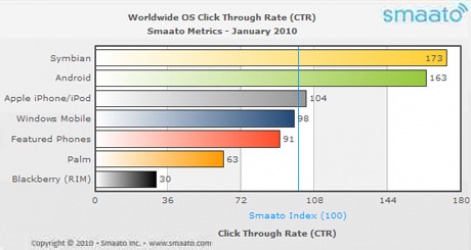 Smaato's metrics are based upon 35 mobile ad networks and over 4 billion ad requests served in the Smaato Network of more than 2,300 registered mobile publishers in January 2010.

It suggest there's been a mix of high performing advertising campaigns which were interesting to the Android audience, while new owners of such handsets are also generally curious about responding to mobile advertising.

Symbian phones still remain in the top position however, moving up slightly from a December rank of 161 to 173 in January.

Apple's iPhone (which includes iPod touch) is now in third position, with 104, compared to being in second place with 119 in December.

More generally, Smaato says that the best performing worldwide ad networks within its aggregation system increased their fill rates by 10 percent to 89 percent. Overall however the average worldwide fill rate dropped from 35 percent to 29 percent.

This decline even affected the best mobile advertising market - America - where the fill rate dropped to 47 percent from 55 percent.