Only 15% free on Ovi Store though

February 23rd, 2010 - 08:16am
By Keith Andrew
Mobile analytics firm Distimo has cast yet more light on the differences between the major mobile marketplaces, the company claiming Android Market has the highest free-to-paid apps ratio of any app store.

Distimo presented the results from its most recent findings during at Mobile World Congress in Barcelona last week, the company collating consumer data gathered from all the major app stores in the US.

According to the results, 57 percent of all apps on Android Market are free, the remaining 43 percent made up of paid apps. 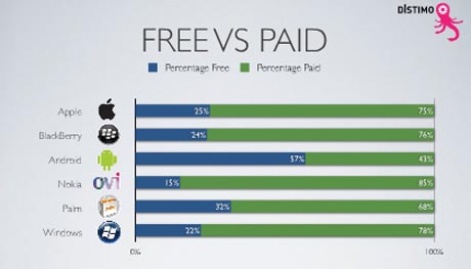 Indeed, in stark comparison, free apps make up only 15 percent of the Ovi Store's current line-up.

Distimo also claims that Android Market is the fastest growing mobile marketplace in the States relatively speaking, new releases making up 15 percent of all apps on the store last month.

The App Store grew by 13,865 new apps across the same period.

As previously reported, apps on Windows Marketplace and Blackberry's App World are priced far higher than those on their rivals.

Those interested in Distimo's findings in full can review the presentation for free in full at the company's blog.