$594 million plus some guessing 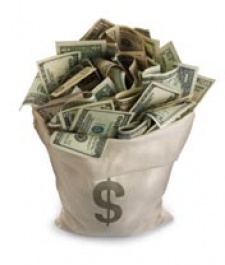 August 26th, 2010 - 04:39pm
By Jon Jordan, Contributing Editor
Who are the biggest companies when it comes to mobile games and how much money do they collectively make? That's the question consultant Jeremy Laws has been pondering on his Cabana Mobile blog.

Some of the information is easy to pin down.

For example, publicly traded outfits such as EA Mobile, Gameloft, Glu Mobile, Gamevil and Com2uS are legally obliged to release their quarterly earnings. That accounts for $594 million.

How big's the pot?

Others are harder to work out, either because the mobile revenues aren't broken out of general earnings, such as Namco Bandai, or because they are private companies.

Laws, who has previously worked at Universal Mobile Entertainment, has made some guestimates however, at least in terms of relative position. 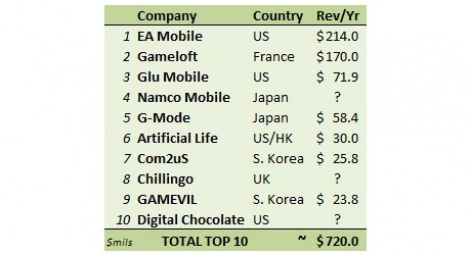 As you can read in the comments section on Cabana Mobile, we've also had a discussion about Japanese behemoth DeNA - which looks like it will have annual sales of $1 billion in 2010, although that's not all games.

I'd be surprised if Chillingo's sales were more than $20 million too, while ngmoco could feature on the list - well, this time next year perhaps.

Feel free to add your tuppence into the debate.