Android set to overtake iOS as US #2 as its marketshare rises 6.5% in past 3 months

Samsung stretches its lead over LG and Motorola

November 4th, 2010 - 12:01am
By Keith Andrew
With NPD suggesting that sales of Android handsets are outpacing those of its rivals in the US, comScore's assertion that Google's OS could slip ahead of iOS before the end of the year isn't all too surprising.

That's based on the current pace as described by comScore's monthly look at each platform's total subscriber base.

In the firm's latest report, Android's US share rose by 6.5 percent between July and September.

Android's total share of the US market now sits at 21.4 percent, with Apple  which currently holds second spot on 24.3 percent  essentially hitting a brick wall, with no growth or decline in past three month period.

Still on top is RIM, although BlackBerry's share continues to fall back, down 2.8 percent to 37.3 percent. 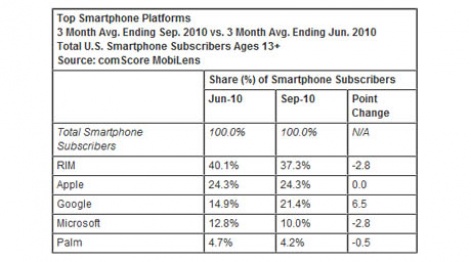 Android's growth in the OS battle is reflected when it comes to the tussle between the top OEMs in the US.

Fellow Android enthusiasts LG and Motorola hold on to their second and third spots respectively, although previous market leader Motorola is in a permanent state of decline at the moment, its share again falling from 20.5 percent in June to 18.4 percent in September. 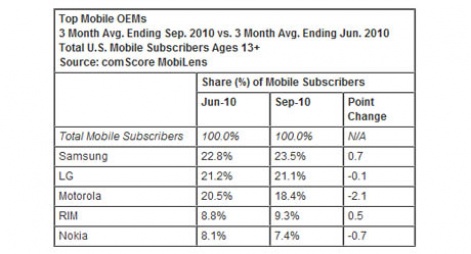 You can view a summary of the findings on comScore's website.