February 14th, 2011 - 10:10am
By Keith Andrew
Ever since Windows Phone 7 was announced, Pocket Gamer has been party to developers both big and small noting that the platform was on their radar.

Even when early shipment figures resulted in disdain from the press, few were willing to write the OS off or withdraw support  a factor the latest stats release from Distimo seems to reflect.

Indeed, the headline stat taken from the firm's latest report, which compares app stores across all major smartphone platforms, is that Windows Phone 7 Marketplace is, proportionally at least, the fastest growing store on the market.

The number of apps on the platform is up 30 percent, putting it ahead of both Android Market on 18 percent and the App Store for iPhone on 1 percent. 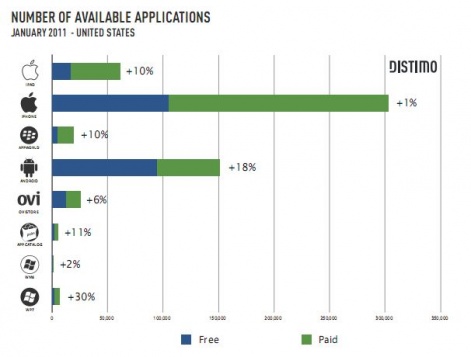 Of course, Windows Phone 7 is growing from a much smaller base in the first place, meaning, viewed from this perspective, it's comparatively easier for Microsoft's platform to race ahead.

However, it's an encouraging sign for the format's health as a whole, suggesting publishers and developers alike have faith that the userbase will come.

Big boy backingThat's a stance backed up by the fact that six of the top 10 cross-store publishers  Rovio coming out on top, with EA in second place and Microsoft taking third  already have apps listed on Windows Phone 7 Marketplace.

That puts it ahead of both its predecessor Windows Mobile and Palm's App Catalog for webOS.

Distimo does note, however, that the number of apps they publish is still quite low compared to rival stores. 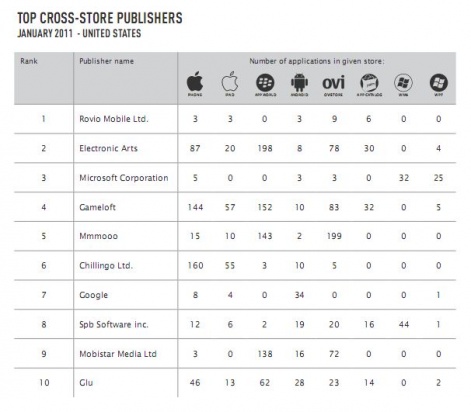 Perhaps most crucially from a developer perspective, Windows Phone 7 has already bedded itself down as an OS pitched as gamers.

Games make up every single one of the top ten selling paid apps on the platform - a feat no other marketplace monitored by Distimo can boast.