But Nokia and Symbian remain in charge worldwide

March 9th, 2011 - 11:50am
By Keith Andrew
If there's one common thread running through all the recent reports on the state of play in the smartphone market, it's that Android's share in North America  or, specifically, the US  is on a high.

The latest analysis from mobile ad network InMobi doesn't stray from the script on that score.

Indeed, numbers taken from the ad network suggest Android's growth across the Atlantic may have been even more dramatic than others have suggested.

Based on impressions taken between October  2010 and January 2011, InMobi claims Android's share in North America has more than doubled from 15.5 percent to its current tally of 36.8 percent.

As a result, it's become the largest OS in the region, shooting past iOS, which saw its share fall by 1.3 percent in the same period. 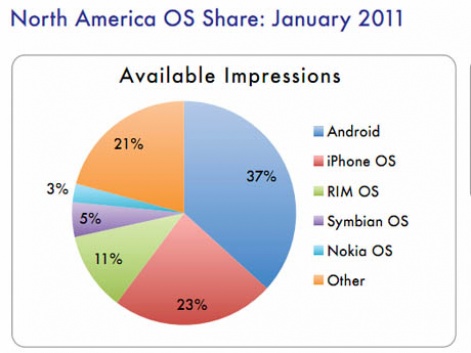 "Android growth in the US and North America has been phenomenal in the past 90 days," said VP managing director, North America, Anne Frisbie.

"With Apples new relationship with Verizon now impacting the market and Microsoft focused on its Nokia partnership, we expect to see massive swings in share and position for all manufacturers and operating systems in the coming months."

While Frisbie believes the Nokia-Microsoft partnership will have an impact on the North American market, it could well be the case that the venture enjoys greater success outside of the US  at least initially.

Numbers from IDC suggest Nokia still enjoys the largest slice of the cake in Europe, while InMobi's stats claim both the Finnish firm and its (until recently) favoured OS Symbian are firmly in charge on a worldwide basis. 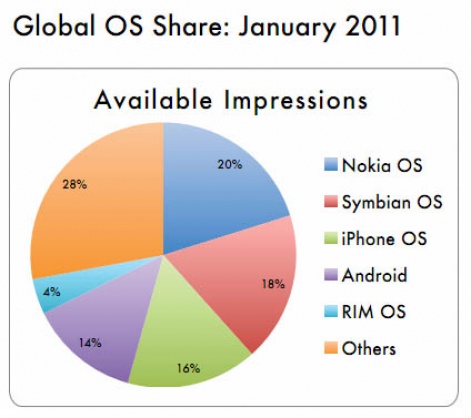 If Nokia can hold on to the allegance of such consumers, Microsoft's platform could have a major role to play worldwide come the end of 2011.

As in the US, however, Android is currently setting the pace in terms of growth, jumping 8.6 percentage points in the three month period.