Freemium releases generate 29% of revenue from top apps in UK

March 25th, 2011 - 03:23pm
By Keith Andrew
It's a model that's generated headlines both good and bad, but freemium releases are gaining a vital foothold in the make up of the mobile market  especially in the UK.

The latest numbers released by Distimo is designed to give an insight into European app marketplaces.

It's been produced for the Mobile Entertainment Forum (MEF), and suggests mobile consumers in the UK have an appetite for apps that eclipses those in the rest of Europe.

Indeed, Distimo claims third of all iPhone and iPad app downloads in the region are made from the UK.

But it's our thirst for freemium releases that's the most interesting aspect, however.

While paid apps remain dominant  64 percent of revenue in the top 100 apps in the MEF region generated by one-off payments for apps  in the UK, 29 percent is generated solely by freemium releases. 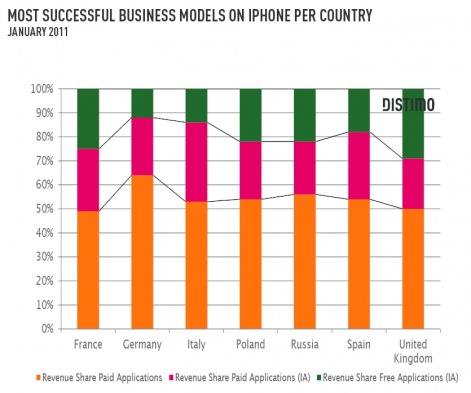 Aside from that, in the region as a whole, a further 21 percent of revenue from the top apps comes from paid apps that also come equipped with in-app purchases.

Games, of course, are the primary driving force behind the IAP model, and  as usual  they dominate the make up of most of the marketplaces included in Distimo's sweep.

The platform with the highest percentage of games is Windows Phone 7, coming in at 58 percent. However, Microsoft's platform is also has one of the highest average app prices  BlackBerry App World the top performer on that score.

RIM's app store comparatively has the lowest percentage of games, making up just 12 percent of its library.

You can read more insight from Distimo's MEF report, which is exclusive available for MEF members on the firm's blog.