87% of developers brand fragmentation a problem for Android

April 5th, 2011 - 12:28pm
By Keith Andrew
A brief glance at the latest survey of 250 developers by William Powers of Baird Research paints a picture of an industry enduring a marriage of convenience with Android.

While most studios are now supporting Google's platform, few seem to be especially happy about it, with the majority labelling fragmentation a 'problem' with the OS.

The two stats combined suggest that working on Android is inevitable for developers looking to monetise their releases, but large portions are unhappy with the ecosystem.

Baird's numbers claim 71 percent of developers now develop for Android, ahead of iOS on 62 percent.

When asked their views on whether fragmentation is a problem with the platform, however, 87 percent branded it as some kind of issue - though the level of its impact differs studio to studio.

For example, 13 percent stated fragmentation is only 'somewhat of an issue', while a dominant 33 percent went further and claimed it is a 'meaningful problem'.

An additional 24 percent plumped for the option with the strongest language available, branding fragmentation a 'huge problem'. 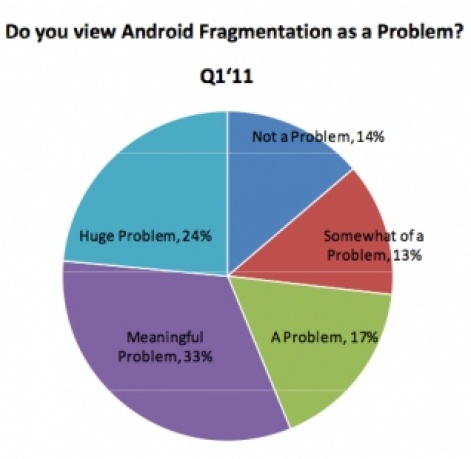 "Generally, developers seem to prefer a unified, single store experience like Apple's App Store," Baird said of the numbers delivered in the report.

Developers also believe their apps are harder to find on Android.

The results suggest that studios believe their apps have more chance of making money on iOS, and that Apple's platform is the easiest to develop for  although Android did come comfortably ahead of rivals BlackBerry and Symbian on that score.