Games on top as 84% tackle titles on their tablets

April 12th, 2011 - 11:12am
By Keith Andrew
If anyone wonders how Apple is able to garner a wealth of hype around iPad while launches of netbooks or PCs go unnoticed, a glance at tablet usage statistics published by AdMob should make things clear.

The only conclusion that can be drawn by the firm's findings  which state that 84 percent of owners use their tablets to play games  is that iPad and co. are seen as leisure devices, rather than work tools.

Indeed, of all eight categories laid about by AdMob, none make reference to any users utilising their tablets for work purposes. 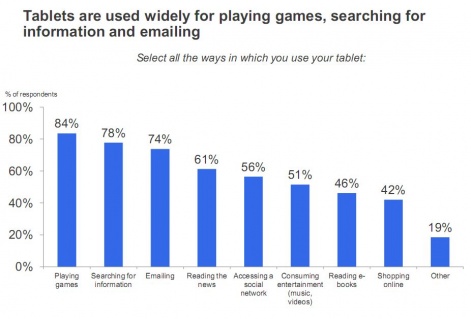 AdMob's tablet survey, which called on 1,430 respondents in the US back in March, also claims that, while 77 percent of those asked claimed their use of laptops and desktop PCs has fallen since they purchased their tablet, only 28 percent said it now acts as their primary computer.

It suggests tablets are a toy for the living room rather than the study, with most users turning to their tablets at night, on weekdays, and in the home rather than when out and about.

In total, 68 percent use their tablets for at least an hour a day  more than half of those for two or more hours. 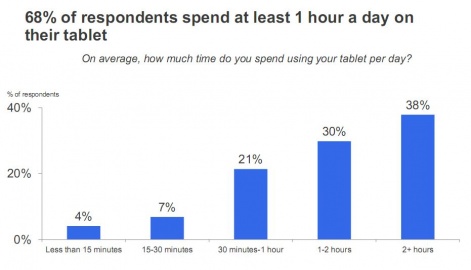