Android's share dips below 50% in US as iOS, BlackBerry claw back

April 14th, 2011 - 11:01am
By Keith Andrew
It's the fourth consecutive month that Android has lead the way in the US, according to Millennial Media's analysis of the smartphone market.

It's also the second month in a row, however, that Google's share has dropped, falling a further 3 percentage points from February to its current total of 48 percent.

Millennial's data  taken from its ad network, which reaches 82 percent of the mobile web in the US  depicted Android's rise to the top throughout the best part of 2010.

Numbers for March, however, suggest both iOS  aided by strong sales of the Verizon iPhone  and BlackBerry have managed to turn the tide, albeit at an especially slow pace. 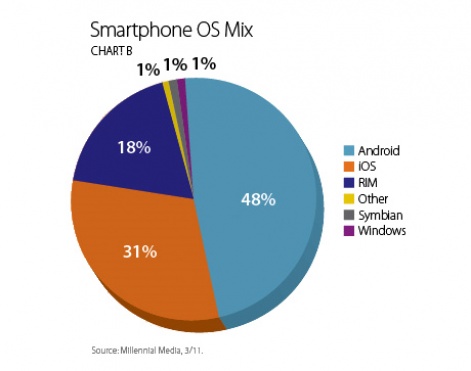 Apple's share has risen by 4 percentage points to 31 percent according to Millennial's numbers, while third placed BlackBerry - which surprisingly saw its share rise last month after a sustained period of decline - is also up by 1 percent to finish on an 18 percent share.

Nonetheless, the battle between the top two might not be as clear cut as their respective market shares make out.

Millennial claims that, when it comes to revenue generated per platform, iOS still leads the way with a 47 percent share to Android's 36 percent.

Conversely, Google's OS is on top when it comes to end-to-user sales.

Apple's iPhone may be the most popular smartphone on the market, but 14 of the current top 20 handsets in the US run Android. 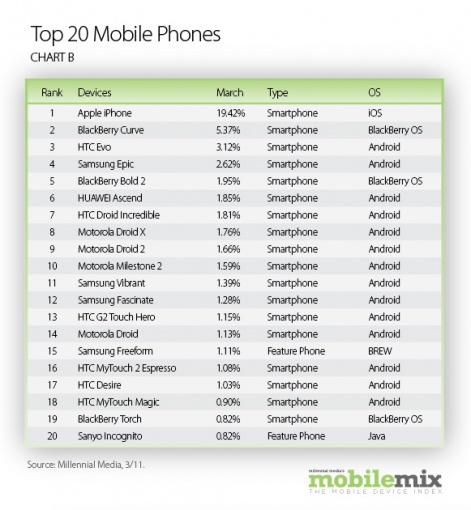 You can read the full Mobile Mix report for March on Millennial Media's website.