April 14th, 2011 - 04:58pm
By Keith Andrew
Just as Android's hold over the US smartphone market appears to be slipping, ad network InMobi claims its share of the global mobile ad market is continuing to rise.

The firm's numbers, calculated from its 31.9 billion monthly ad impressions, show a dual assault by both Android and iOS.

The difference between the two, InMobi claims, is that Android's spread across multiple handsets is affording it a far faster rate of growth than its close competitor.

Google's platform has some way to go before it dethrones Nokia, however.

Though Symbian's share will likely fall in the coming months as the Finnish firm makes the transition to Windows Phone 7, Nokia and Symbian combined still control more than 40 percent of the global market.

Nevertheless, InMobi believes Android's ad growth is significant, if only because it's the first time Google's OS has commanded a greater share of the worldwide market than iOS.

"The introduction of Android has significantly accelerated smartphone growth, as it brings a wealth of options to consumers," said VP of global research and marketing at InMobi, James Lamberti.

"With the increased focus on mobile from global publishers, advertisers and developers the mobile experience has reached the next phase of its evolution."

It's an evolution aided by the growth of key Android advocates Samsung and HTC.

Both parties have seen their share of the mobile ad market rise in the last 90 days (up 5.3 percent and 9.5 percent respectively), while Apple has seen it's share fall by more than 10 percent across the same period.

At such pace, it's likely both parties will command a greater share of the market than both Apple and Nokia by the time InMobi lifts the lid on its comparative global report in 90 days time.

"We're witnessing such rapid adoption of Android, that its now eating into the iPhones share in Europe, as it has done in the US," said VP managing director of Europe and the Middle East, Rob Jonas.

"The incredible growth of smartphones, as demonstrated by these findings, really highlight that brands and agencies can no longer ignore the importance of mobile and the opportunities in the market."

Android is now top dog in Europe, according to March's figures, with a 29.1 percent share of the market - just shy of the share Apple held three months previously. 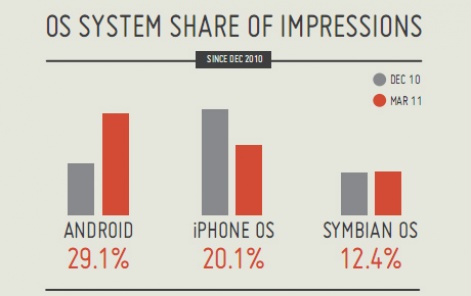 InMobi also notes that Android smartphones are acting as a gateway to digital content in emerging markets across Asia, Eastern Europe and Africa, unseating the traditional desktop PC or laptop in the process.