iOS userbase hits 37.9 million in US as Apple's reach outperforms Android by 59%

April 19th, 2011 - 10:18pm
By Keith Andrew
While the majority of reports tend to focus solely on smartphone take up, for the first time, the latest numbers published by comScore aggregate the shares acquired by portables media players and tablets too.

The result is while Android might be top dog in the smartphone race, iOS's total reach far outstrips that of Google's platform when iPod touch and iPad numbers are taken into account.

In total, iOS's userbase in the US now sits at 37.9 million to Android's 23.8 million when sales of Galaxy Tab and other Android tablets such as Motorola Xoom are accounted for.

As a result, comScore claims Apple's reach is 59 percent larger than that of Google when it comes to total market penetration. 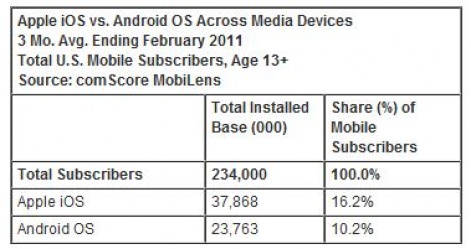 "Though it's frequently assumed that the Apple user base is composed of dedicated Apple 'fanboys', theres not a tremendous amount of overlapping mobile device access among these users.

"This of course has significant implications for the developer community as they consider the market potential in developing applications for different mobile platforms."

ComScore has also looked into who is fuelling iPad's success, dispelling the myth that they're solely the domain of the 'Apple fanboy'.

Numbers suggest that just 4 million iOS consumers own more than one device running the platform  a stat backed up by comScore's assertion that almost 73 percent of iPad consumers own another smartphone other than iPhone. 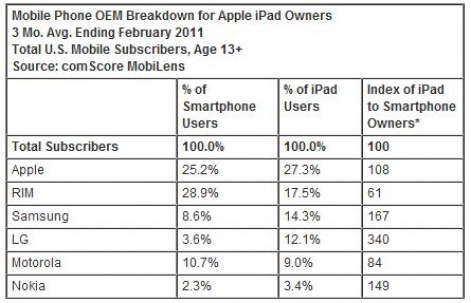 BlackBerry is the most popular non-iPhone handset for iPad owners, making up 17.5 percent of the tablet's userbase.

"Although a perception may exist that iPad owners tend to be those with a very strong affinity for Apple products, an analysis of the mobile devices of iPad owners indicates that may not be the case," comScore concludes.

"While Apple is indeed the most heavily represented OEM among iPad owners, its OEM share is only slightly higher than its share among all smartphone subscribers."

You can read comScore's findings in full on the firm's website.