April 21st, 2011 - 02:26pm
By Keith Andrew
Following on from comScore's iOS splash in the US, the network has laid open what it believes to be the platform's total userbase  wrapping up iPhone, iPad and iPod touch sales  in the big EU5 countries.

In total, comScore states Apple has managed to sell 28.9 million iOS devices to-date across the UK, Germany, France, Spain and Italy, handing the firm a 12.4 percent share of the 'mobile' market.

Though that's less than 37.9 million sold in the US to date, iOS is fairing even better against Android in the five major European markets.

In short, that means iOS is more than twice the size of Android across the EU5.

As with the US report, comScore also believes it's a myth that only iPhone owners buy iPads. 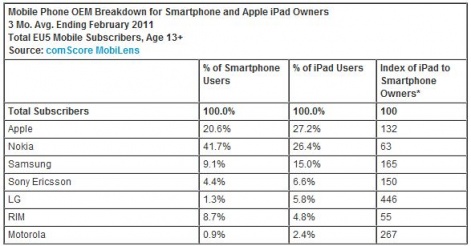 Again, almost 73 percent of iPad users own a phone other than iPhone, with Nokia owners almost outnumbering their iPhone equivalents with a 26.4 percent share to iPhone's 27.2 percent.

You can read comScore's findings in full on the firm's website.